In Colour (album) by Jamie xx 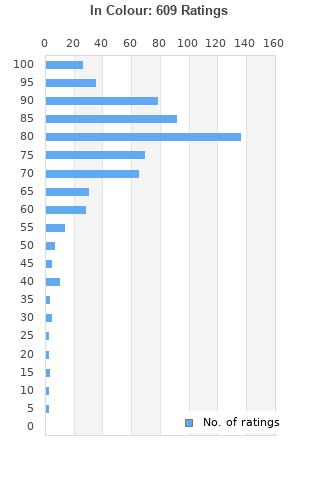 JAMIE XX CD IN COLOUR TECHNO MUSIC HOUSE UK GARAGE DOWNTEMPO DANCEHALL
Condition: Very Good
Time left: 8d 16h 6m 47s
Ships to: Worldwide
$19.36
Go to store
Product prices and availability are accurate as of the date indicated and are subject to change. Any price and availability information displayed on the linked website at the time of purchase will apply to the purchase of this product.  See full search results on eBay 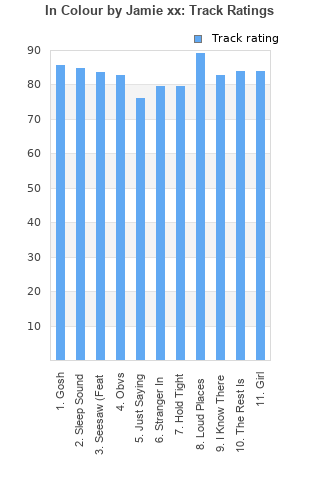 Rating metrics: Outliers can be removed when calculating a mean average to dampen the effects of ratings outside the normal distribution. This figure is provided as the trimmed mean. A high standard deviation can be legitimate, but can sometimes indicate 'gaming' is occurring. Consider a simplified example* of an item receiving ratings of 100, 50, & 0. The mean average rating would be 50. However, ratings of 55, 50 & 45 could also result in the same average. The second average might be more trusted because there is more consensus around a particular rating (a lower deviation).
(*In practice, some albums can have several thousand ratings)
This album is rated in the top 3% of all albums on BestEverAlbums.com. This album has a mean average rating of 77.0/100. The trimmed mean (excluding outliers) is 78.6/100. The standard deviation for this album is 15.5.

This is a great debut album and a sign of great things to come.

The album starts of really strong, but hits a lull from the 6th to 8th track. There is a lot of positive in this album, but it does feel a little monotonous at times.

The production is unreal. It's a true gem.

Truly the best thing I heard all last year. I understand most people not digging it but it is definitely great for me.

A pretty good album made by Jamie xx. Loud Places and I Know There's Gonna Be Good Times are my favorite tracks on this album. No bad tracks on the album, but nothing too outstanding to make it known as one of the best albums ever.

I found this album to be nice, but not really special in any way. This is a genre of music that I usually love, dance music that expands beyond just four-to-the-floor thinking, but I just couldn't get into this album at all. May revisit later, but for now it'll remain as a slight disappointment given all the hype I'd heard.

Jamie xx succeeds by making calm, subtle, entrancing rhythms with absolutely stellar production. This is probably the ultimate headphones album of 2015 as a result. This collection of songs, despite a somewhat slow, weak section in the middle, still holds together as some of the finest production work of the decade, and a pretty great album too. The highlight, "Loud Places", is my favorite song of 2015, and is absolutely heartwrenching and yet still almost danceable. Unfortunately, the next song ABSOLUTELY DESTROYS what "Loud Noises" set up in terms of mood and tempo. I can forgive Jamie xx for a lot of things, but the fact that he put that song right there is the only thing that I truly think really holds this album back. Other than that small misstep, the album passes with flying colors.

Wow! My favorite album of the year and one of my favorite albums of its type (hate to call it this, but "IDM"?). Really has rewarded repeated listening. "Oh my Gosh" rivets me always: from the close and industrial in the first half of the song, to the epic soaring perspective of the synth song in the second half.

Nice but not amazing. Amazing singles and good mix, but some songs dragged this album from what could have been one of my favorites to something merely decent. Gosh is maybe my favorite song of the year, though.

Your feedback for In Colour