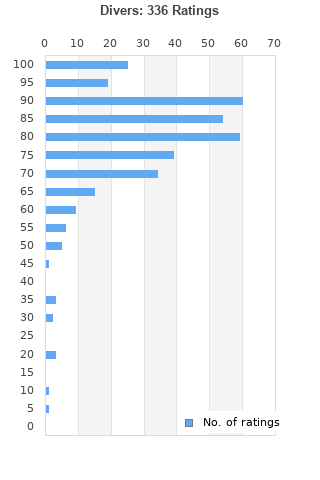 Divers is ranked 4th best out of 7 albums by Joanna Newsom on BestEverAlbums.com.

The best album by Joanna Newsom is Ys which is ranked number 180 in the list of all-time albums with a total rank score of 9,617. 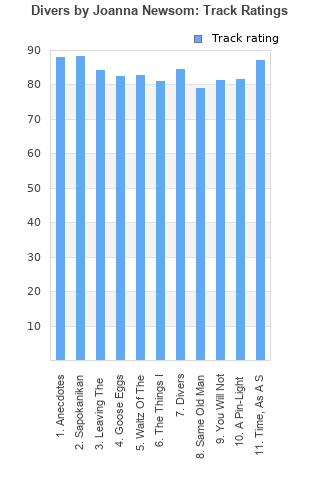 Rating metrics: Outliers can be removed when calculating a mean average to dampen the effects of ratings outside the normal distribution. This figure is provided as the trimmed mean. A high standard deviation can be legitimate, but can sometimes indicate 'gaming' is occurring. Consider a simplified example* of an item receiving ratings of 100, 50, & 0. The mean average rating would be 50. However, ratings of 55, 50 & 45 could also result in the same average. The second average might be more trusted because there is more consensus around a particular rating (a lower deviation).
(*In practice, some albums can have several thousand ratings)
This album is rated in the top 1% of all albums on BestEverAlbums.com. This album has a Bayesian average rating of 80.6/100, a mean average of 79.5/100, and a trimmed mean (excluding outliers) of 80.8/100. The standard deviation for this album is 14.9.

Working my way through the best rated album of each year, I have reached 2015 and swung by this entry to leave my regards and move on to something I'm not familiar with. Then I find myself just putting the album on. Just one more listen. Yet, after all why not? Why shouldn't I listen to it? Now it comes to it, I don't feel like parting with it, its mine, I found it, it came to me!

I got past the initial fear of Joanna’s mewly voice a long time ago and quickly became aware of how phenomenal a musician she is. But just as I was questioning what new ideas she could present, Divers came along and showed me that while she might not be able to shake off her granola image, she’s definitely a modern artist.

Best track: You Will Not Take My Heart Alive. From the harp trills and melismata to the ominous synth towards the end, this is one of her greatest pieces of music.

Not some of her best work, but undeniably consistently beautiful throughout with no clear weak tracks. A great piece of art.

A very good album but still probably Joanna Newsom's weakest so far. Not as quirky and strong as, milk eyed mender, and not as gloriously ambitious as, ys, and, have one on me, still, a weaker Joanna Newsom record is still pretty fantastic and I'm sure there is a lot more to come from her, but this is my least favourite one of her records to date.

Anecdotes made me listen through the whole album.

It's got a lot going for it. The lyrics are a legitimate attempt at a "theory of everything", with some considerable success, and capturing some of the most nuanced and poetic turns-of-phrase since all of those literary masters (Nabokov, Shakespeare, Wolfe, what have you).

The music is now substantially different from "Ys" (admittedly the only other album I have listened to thus far), with much more of a progressive atmosphere here that's especially reminiscent of Jethro Tull (Thick as a Brick, Songs from the Wood), abandoning the "freak folk" soundscapes. It's evocative and wistful, and serves a purpose beyond just being a soundtrack to a story. Her style of storytelling, too, has refined its nuances, resembling a Japanese Noh drama more than a Chinese opera, as on "Ys".

I ultimately only give it an "A-" however. The second half is far less rich musically than the first, and the pure scope of it all can leave a sour taste on the tongue, even as it is extraordinarily impressive at moments. Sometimes the orchestra sounds a bit fake.

This for me is her best album it seems a little more accessible than her previous works. Her voice is a matter of taste but I don't find it as annoying on this album. I can only listen to Ys for about 10 mins before I give up. This effort seems easier on the ear.

Speechless... What a beautiful album...

Well the only thing slightly dissapointing here is that Divers feels like the first Newsom album that isn't a radical departure from what's come before, mainly cause it comprises many familiar threads of her previous albums: the fairy-tale sweetness of Milk-Eyed Meander, the ultra-opaque song structures and bewitching, multi-layered fable-style storytelling of Ys and that crescending, very new-york-jazzy atmosphere that dominated the latter half of Have One on Me. A radical knockout or shock to the system it may not be, at least on first listen, but in many ways it doesn't matter because Divers is just splendid. Has both a lovely playfulness and a newfound earthly maturity of the more seasoned but still eternally young-at-heart misfit artist Newsom's always been.

Your feedback for Divers