The Powers That B (compilation album) by Death Grips 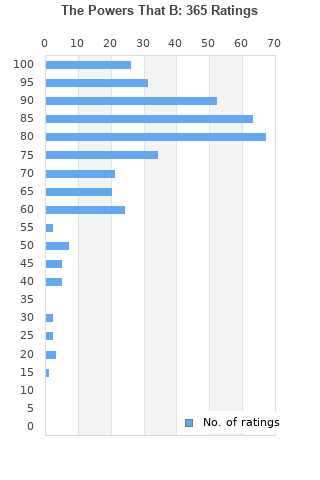 The Powers That B is ranked 3rd best out of 13 albums by Death Grips on BestEverAlbums.com.

The best album by Death Grips is The Money Store which is ranked number 200 in the list of all-time albums with a total rank score of 8,952. 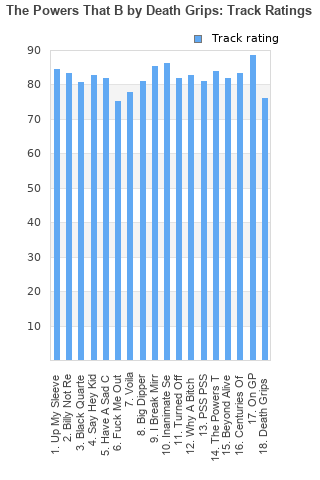 I Break Mirrors With My Face In The United States
Rating: 85 (76 votes)Comments:

The Powers That B rankings

The Powers That B collection

The Powers That B ratings

Rating metrics: Outliers can be removed when calculating a mean average to dampen the effects of ratings outside the normal distribution. This figure is provided as the trimmed mean. A high standard deviation can be legitimate, but can sometimes indicate 'gaming' is occurring. Consider a simplified example* of an item receiving ratings of 100, 50, & 0. The mean average rating would be 50. However, ratings of 55, 50 & 45 could also result in the same average. The second average might be more trusted because there is more consensus around a particular rating (a lower deviation).
(*In practice, some albums can have several thousand ratings)
This album is rated in the top 2% of all albums on BestEverAlbums.com. This album has a Bayesian average rating of 79.6/100, a mean average of 78.7/100, and a trimmed mean (excluding outliers) of 79.8/100. The standard deviation for this album is 15.5.

The Powers That B favourites

The Powers That B comments

This is a bloated release and I don't think it warrants being as long as it is. There are a few tracks that feel like filler or could be trimmed down so the album is a lot easier to digest and isn't as dragged out as is it. None of the tracks properly blew me away either which is strange for a DG album as usually there are quite a few tracks like this. There are some enjoyable songs on this album that make the record well worth experiencing though. Alongside that is the vocal and the lyrics which are fuelled with passion and give you a lot to explore as the words are very cryptic. The tempo is great as well and never slows down making for an entertaining and thrilling ride even if it is an hour and 20 minutes. Overall, DG albums usually grow on me so this opinion might change but at the minute I don't think this is one of their better albums even though I do enjoy the music.

I would give disk 1 an 80 and disk 2 a 90, so 85 is the average. For those basic Death Grips fans like me who think that the Money Store is their best, you will love disk 2. It has more melodic instrumentation that really makes for a great listen. Like all Death Grips, best consumed with the windows down and your car stereo on full blast:)

They go for a chaotic noisy background, which in general I'm a fan of, but definitely don't like their approach. They are too aggresive, too violent, it's as if they are trying to force matters. This criticism is mostly pointed towards the vocals (not sure I can call it rapping), but it's also reflected on their overall sound. These guys are maniacs. On the other hand, I have to note that the cryptic/seemingly random lyrics are something I enjoy ("Inanimate sensation Vantage perspective from objective it came from Inanimate situation No relation, close liaison No conversation, no social contagion Bother me, wanna be comrade intrusive I remain Inanimate aloof skip Counterfeit Like no can do, bitch My vinyl vibrate higher than you, bitch I represent, ain't meant to pursue which One of you, oh you all wanna ride, well, I ain't got room stress While we continue to make shit tight the loosest") , even though isolating them from everything else that's going on is not an easy task.

Coming back to say this is one of my favorite albums ever now. The first half is a masterpiece.

New favorite Death Grips album. The Money Store is great, but it's a bit indigestible for me. The Powers That B is consistently entertaining, both NOTM and Jenny Death. I will agree with the general consensus and say I prefer Jenny Death, I wouldn't discount the first half though. I was very pleasantly surprised by this album, considering the reviews I'd seen.

one of the best death grips albums for sure

For my money, this Death Grips most consistent album that I've heard which is quite something given that it's their longest as well. It's also their least accessible but after listening 7 or 8 times, I enjoy the entire album front to back now. It's a grower like most DG albums. There is more energy on this album than most bands have put out in their entire careers and there is almost nobody that can put out a release this original. The Bjork vocals alone are enough to make this album unique but add Ride's dynamic flow that reaches a full cry of bloody murder at points and the indiscernible combination of percussion and other sounds and instruments and you have something that nobody has ever heard before. I love the absolute chaos of the first disc and prefer it to the second. I really like every song but "Voila" and "Inanimate Sensation" are my favorites. "Fuck Me Out" is the only song that I have a hard time appreciating but even it has its moments.

The first half of the Jenny Death double album was better in some ways, but I definitely dug the diversity of sounds on this half. It’s somehow more of a “party” album.

Best track: Inanimate Sensation. The closest thing to a “hit” they’ll ever have.

Death Grips starting to incorporate rock in their unusual sound. It results in a good finale with "On GP".

Your feedback for The Powers That B