I Love You, Honeybear (studio album) by Father John Misty 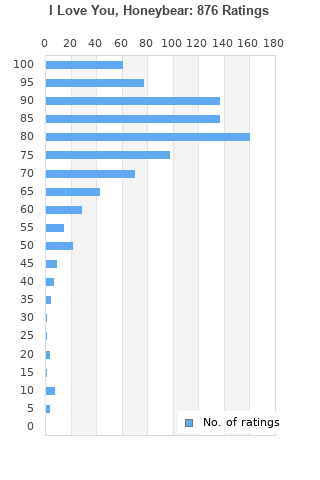 Father John Misty ‎– I Love You, Honeybear VINYL 2LP NEW SEALED
Condition: New
Time left: 18h 27m 26s
Ships to: Worldwide
$49.95
Go to store
Product prices and availability are accurate as of the date indicated and are subject to change. Any price and availability information displayed on the linked website at the time of purchase will apply to the purchase of this product.  See full search results on eBay

I Love You, Honeybear is ranked as the best album by Father John Misty. 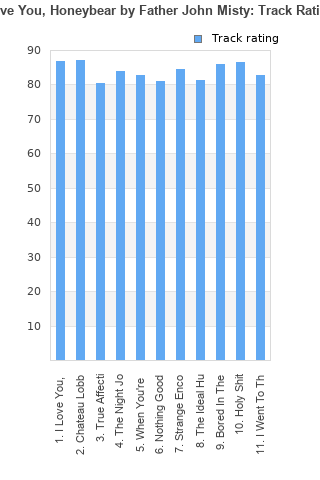 1
6.
Nothing Good Ever Happens At The Goddamn Thirsty Crow
Rating: 81 (156 votes)Comments:

I Love You, Honeybear rankings

I Love You, Honeybear collection

I Love You, Honeybear ratings

Rating metrics: Outliers can be removed when calculating a mean average to dampen the effects of ratings outside the normal distribution. This figure is provided as the trimmed mean. A high standard deviation can be legitimate, but can sometimes indicate 'gaming' is occurring. Consider a simplified example* of an item receiving ratings of 100, 50, & 0. The mean average rating would be 50. However, ratings of 55, 50 & 45 could also result in the same average. The second average might be more trusted because there is more consensus around a particular rating (a lower deviation).
(*In practice, some albums can have several thousand ratings)
This album is rated in the top 2% of all albums on BestEverAlbums.com. This album has a Bayesian average rating of 80.5/100, a mean average of 79.4/100, and a trimmed mean (excluding outliers) of 80.6/100. The standard deviation for this album is 15.7.

I Love You, Honeybear favourites

I Love You, Honeybear comments

Very surprised by this album but the cover is great and the music is not disappointing . Very good although wonderful story about Love from John Misty. My Favorite Track is I love you, Honeybear.

Such an amazing and beautiful album. Its been one year since I started listening to Father John Misty and since, I have completely fallen in love with his music.

I had a hard time trying to decide which album I prefer the most from him, but I think that this is the one. It's catchy, moving, consistent, amazing lyrics, great and colorful instrumentation, it's perfect. Definitely one of my favourite albums of the decade

Impressive melodies and vivid lyrics. Best demonstrates that white rock star vibe that FJM does so well. If Bradley Cooper in "A Star is Born" was more self-aware, he'd make this album.

Musical dirty realism. As colorful and throbbing as a bruise

A heartfelt yet cynical album. It’s so damn good.

Sublime album, lots of awesome songs in here and much more cohesive than his first effort. 8.8/10.

I really enjoy this album. As others have said the lyrics are wonderful. But the music is great too - with a nod to Don Maclean. Much better than his most recent effort.

Desert island record... Some of the greatest lyrics and vocal deliveries ever recorded over some epic instrumentation organized by Tillman himself and Jonathan Wilson. Favorite track: Holy Shit

Your feedback for I Love You, Honeybear