Never Turn Your Back On A Friend (studio album) by Budgie 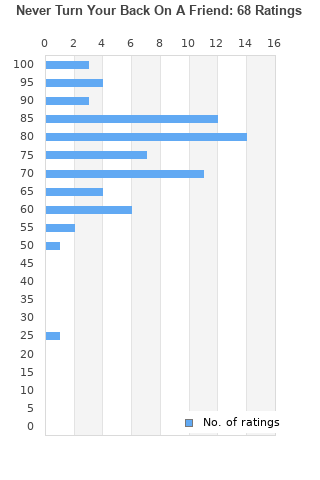 Budgie Never Turn Your Back On A Friend LP Vinyl 1975 ORIG Japan MCA-6069
Condition: Used
Time left: 3d 14h 17m 25s
Ships to: Worldwide
$85.00
Go to store
Product prices and availability are accurate as of the date indicated and are subject to change. Any price and availability information displayed on the linked website at the time of purchase will apply to the purchase of this product.  See full search results on eBay

Never Turn Your Back On A Friend is ranked 2nd best out of 17 albums by Budgie on BestEverAlbums.com.

The best album by Budgie is Bandolier which is ranked number 5424 in the list of all-time albums with a total rank score of 238.

Listen to Never Turn Your Back On A Friend on YouTube

Never Turn Your Back On A Friend track list 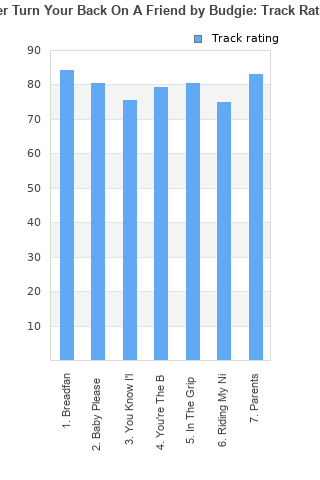 0
4.
You're The Biggest Thing Since Powdered Milk
Rating: 78 (12 votes)Comments:

Never Turn Your Back On A Friend rankings

Never Turn Your Back On A Friend collection

Never Turn Your Back On A Friend ratings

Rating metrics: Outliers can be removed when calculating a mean average to dampen the effects of ratings outside the normal distribution. This figure is provided as the trimmed mean. A high standard deviation can be legitimate, but can sometimes indicate 'gaming' is occurring. Consider a simplified example* of an item receiving ratings of 100, 50, & 0. The mean average rating would be 50. However, ratings of 55, 50 & 45 could also result in the same average. The second average might be more trusted because there is more consensus around a particular rating (a lower deviation).
(*In practice, some albums can have several thousand ratings)
This album is rated in the top 5% of all albums on BestEverAlbums.com. This album has a Bayesian average rating of 77.0/100, a mean average of 76.7/100, and a trimmed mean (excluding outliers) of 77.7/100. The standard deviation for this album is 13.7.

Never Turn Your Back On A Friend favourites

Never Turn Your Back On A Friend comments

I loved Budgie back in the day, especially as a live band. At their best they were awesome, but their early albums also included some weird stuff. This album is typical of their 70s work. The opener Breadfan was an absolute classic and became a mainstay of their live sets. The closer Parents is another wonderful track. But the rest of the album is rather hit and miss.

If you don't have any Budgie and like early heavy rock music the do yourself a favour and get this album and Bandolier, both classics. Budgie we a band that were just so good it was unbelievable that they never hit the really big time. I suppose they just did not get the exposure they deserved, unlike the like of Black Sabbath, Deep Purple or Led Zeppelin at the time. Sadly I never got to see them live, even though I purchased my first copy of Bandolier in 1976, what was I thinking.

Burke Shelly produces some soaring vocals and classic bass line, and Tony Bourge guitar work is some of the best you will hear, and this is all held together and complimented by the drumming engine of Ray Phillips. They just knew how to work together as a tight 3 piece, probably had to as nowhere to hide in a 3 piece unit.

I have a theory about great album covers and great albums which I will often reference in comments. This is a classic example, fantastic cover with an amazing album within. Did Budgie want to be taken seriously though, with track names like 'You're the Best Thing Since Powdered Milk' and 'In the Grip of a Tyrefitters Hand'. The thing I love about Budgie is that they moved from really heavy material to the almost ethereal like 'You Know I'll Always Love You'. Great drum solo at the beginning of 'Powdered Milk'. The guitar work on 'Parents' is superb! Get it on vinyl if you can.

Your feedback for Never Turn Your Back On A Friend