The best album credited to Danielle Dax is Pop-Eyes which is ranked number 20,100 in the overall greatest album chart with a total rank score of 48.

Danielle Dax is ranked number 7,251 in the overall artist rankings with a total rank score of 87.

15/4/89Pgn07 Advert: Danielle Dax Dynamic Single 'white Knuckle Ride' 3x11
Condition: Good
Time left: 10h 56m 17s
Ships to: Worldwide
£4.99
Go to store
Product prices and availability are accurate as of the date indicated and are subject to change. Any price and availability information displayed on the linked website at the time of purchase will apply to the purchase of this product.  See full search results on eBay

The following albums by Danielle Dax are ranked highest in the greatest album charts:

This may not be a complete discography for Danielle Dax.This listing only shows those albums by this artist that appear in at least one chart on this site. If an album is 'missing' that you think deserves to be here, you can include it in your own chart from the My Charts page! 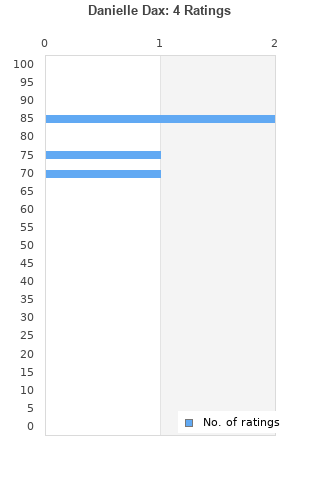 At the height of late 80's post-punk, when alternative was on the rise, one of the artists that never found a home with a wider audience was Danielle Dax. While cranking out highly intelligent, creative songs that had catchy pop sensibilities, she struggled in total obscurity. Weird, because everyone who was familiar with her loved her. The word of mouth press was fantastic but it never got beyond that.

Dax' style incorporated elements from a diverse array of genres including punk, folk/acoustic, Middle-Eastern, dance, metal, Goth and even country. Her vocals fluctuated from smooth & beautiful to shrill & manic without skipping a beat. On top of that, she wrote all of her own songs and played many of the instruments.

Your feedback for Danielle Dax