The best album credited to Pendulum is Immersion which is ranked number 4,115 in the overall greatest album chart with a total rank score of 339.

Pendulum is ranked number 1,773 in the overall artist rankings with a total rank score of 693.

The following albums by Pendulum are ranked highest in the greatest album charts:

This may not be a complete discography for Pendulum.This listing only shows those albums by this artist that appear in at least one chart on this site. If an album is 'missing' that you think deserves to be here, you can include it in your own chart from the My Charts page!

0
(from the album Hold Your Colour)
4.
Propane Nightmares
Rating: 80 (9 votes)Comments:

0
(from the album Hold Your Colour)
10.
Fasten Your Seatbelt - Freestylers, Pendulum
Rating: 78 (6 votes)Comments:

0
(from the album Immersion)
Show more
N.B. Tracks must have received at least 3 ratings to appear in the above list. 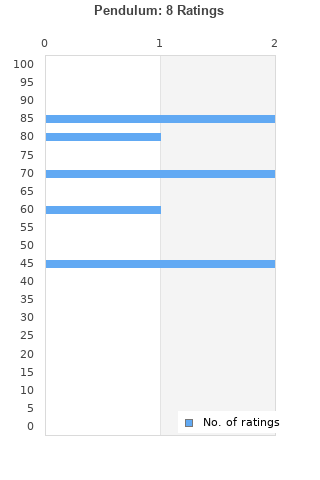 I went through a phase of playing Bloodsugar every single day for about a week and thought that Pendulum were the best thing ever. It never really lasted though after that. Mind you, they're still mighty good fun on occasion, and Still Grey is a fantastic tune.

Your feedback for Pendulum