5 Seconds Of Summer is ranked number 12,260 in the overall artist rankings with a total rank score of 35.

5 Seconds Of Summer - Livesos - 5 Seconds Of Summer CD GIVG The Fast Free
Condition: Very Good
Time left: 3h 21m 52s
Ships to: Worldwide
$7.92
Go to store
Product prices and availability are accurate as of the date indicated and are subject to change. Any price and availability information displayed on the linked website at the time of purchase will apply to the purchase of this product.  See full search results on eBay

One Direction Vs. 5 Seconds of Summer
Subterranean, Chicago, United States.

The following albums by 5 Seconds Of Summer are ranked highest in the greatest album charts:

This may not be a complete discography for 5 Seconds Of Summer.This listing only shows those albums by this artist that appear in at least one chart on this site. If an album is 'missing' that you think deserves to be here, you can include it in your own chart from the My Charts page!

1
(from the album 5 Seconds Of Summer)
N.B. Tracks must have received at least 3 ratings to appear in the above list. 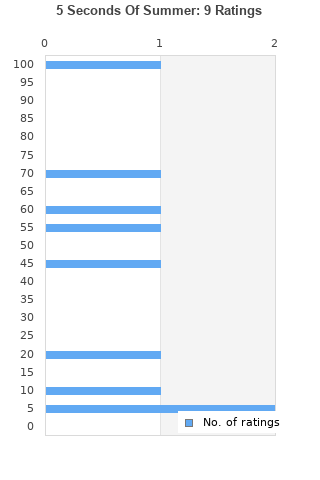 Completely unoriginal, shallow, and useless boyband. Its, "Artists" like these that gave me the impression that good music and modern music were two distinct entities.

Horrible and unoriginal. Copying many artists like Fall Out Boy and My Chemical Romance. Basically generic pop shit love songs but with more guitar and drums, which apparently labels it as punk. This is far from punk. It's not even pop punk. It's definitely just pop. They try way to hard to make edgy emo lyrics that make no sense in the end. Also in their new song 'Hey Everybody' not only copies 'Hungry Like The Wolf' by Duran Duran but the lyrics are about people who don't have enough money and are poor, and how are 5SOS meant to know how that feels? At the age of 16 or something they've been surrounded by teenage girls that are willing to pay for what ever garbage they put out.

Your feedback for 5 Seconds Of Summer