The best album credited to Menomena is Friend And Foe which is ranked number 4,614 in the overall greatest album chart with a total rank score of 293.

Menomena is ranked number 1,662 in the overall artist rankings with a total rank score of 749.

MENOMENA Mines CD Europe City Slang 2010 11 Track In Digipak SLANG744234
Condition: Like New
Time left: 4h 34m 56s
Ships to: Worldwide
£5.35
Go to store
Product prices and availability are accurate as of the date indicated and are subject to change. Any price and availability information displayed on the linked website at the time of purchase will apply to the purchase of this product.  See full search results on eBay

The following albums by Menomena are ranked highest in the greatest album charts:

This may not be a complete discography for Menomena.This listing only shows those albums by this artist that appear in at least one chart on this site. If an album is 'missing' that you think deserves to be here, you can include it in your own chart from the My Charts page!

0
(from the album Mines)
Show more
N.B. Tracks must have received at least 3 ratings to appear in the above list. 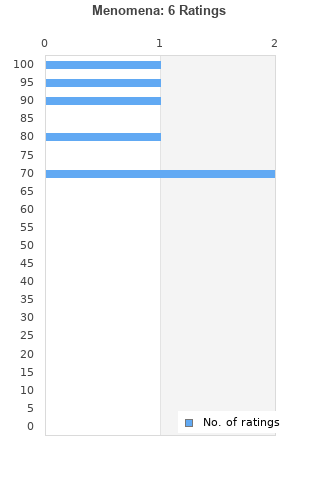 One of the most interesting and unique bands in the world. Their songs can stun, excite, and make you cry, sometimes all within the course of 30 seconds. Atypical songwriting that defies any human expectation abounds throughout their records, all the while remaining intensely personal and emotional. Their top albums of "Friend and Foe" and "Mines" are two of the best released in the last 10 years.

One of the greatest artists of all-time.

This is possibly the most underrated and underappreciated bands at the moment. Not only are they producing some of the most incredible music today, but they're making music in a way that no one else is. Using their own software and methodology, these guys are changing modern music production, and no one is paying attention. PAY ATTENTION. Menomena is right up there as one of the leading modern acts, and I say that without exaggeration. Seriously one of the finest groups around, and of all time.

Your feedback for Menomena