The Drums (studio album) by The Drums 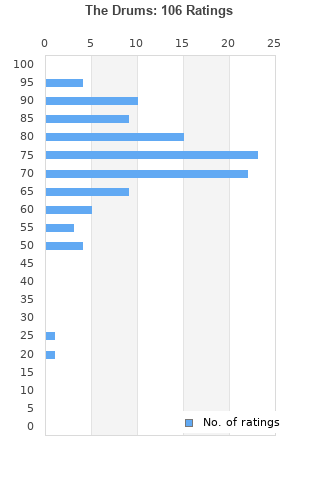 ROYAL SCOTS DRAGOON GUARDS - THE PIPES & DRUMS & MILITARY BAND OF THE ROYAL SCOT
Condition: Brand New
Time left: 49m 35s
Ships to: Worldwide
$8.84
Go to store
Product prices and availability are accurate as of the date indicated and are subject to change. Any price and availability information displayed on the linked website at the time of purchase will apply to the purchase of this product.  See full search results on eBay

The Drums is ranked as the best album by The Drums. 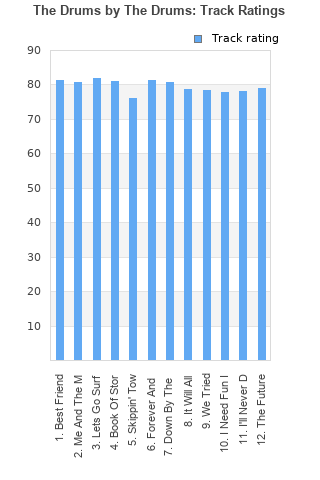 Rating metrics: Outliers can be removed when calculating a mean average to dampen the effects of ratings outside the normal distribution. This figure is provided as the trimmed mean. A high standard deviation can be legitimate, but can sometimes indicate 'gaming' is occurring. Consider a simplified example* of an item receiving ratings of 100, 50, & 0. The mean average rating would be 50. However, ratings of 55, 50 & 45 could also result in the same average. The second average might be more trusted because there is more consensus around a particular rating (a lower deviation).
(*In practice, some albums can have several thousand ratings)
This album has a Bayesian average rating of 74.1/100, a mean average of 73.2/100, and a trimmed mean (excluding outliers) of 74.2/100. The standard deviation for this album is 12.8.

Very 80’s Manchester for me. It’s as if new order had grown up in California rather than the north of England. I like it.

Some catchy and danceable songs about being young and heartbroken. With a strong 80's influence, but in less darker way.

Catchy Indie rock. Lots of decent tunes on it!

This is a great album because of its simplicity and easy going energy. It is easy going and soothing for that precise moment of the day. I think this reminded me a lot Is this it by The Strokes not because of the sound but I don't think I had listened to such a straight forwarded and unpretencious album since that debut until now

hmm.. i drink about 15 cups of tea a day, mostly green/white. i don't think i've hallucinated yet, although my hands have grown several inches in the past few months..

I heard butter and cheese help give you lucid and more vivid dreams. Voltaire also drunk more than a dozen cups of coffee a day to help with his writing. Caffeine causes hallucinations taken in huge amounts apparently. I can't stress the huge part enough, it would take 8+ 250ml Red bulls to get the desired effect.

i actually ran out of food today and have been eating nothing but buttered toast (i NEVER eat butter and very rarely toast) so i'll add this to the catalogue of synchronicities i've been experiencing lately! i should add that i think 'disorder' sucks; plenty of tracks i like have ripped off tracks i didn't like. i guess the musical landscape is a rich - and often self-referencing - tapestry, in which meaning can be found in all manner of unlikely combinations of influence. my god, the butter has gone to my head.

I was totally shocked to see telefunker like this album, I like it, a few catchy tunes

I see what you did there ;)

Try buttering your toast - the bassline on "The Future" is a total ripoff from "Disorder" ;)

Your feedback for The Drums