The Wild Hunt (studio album) by The Tallest Man On Earth 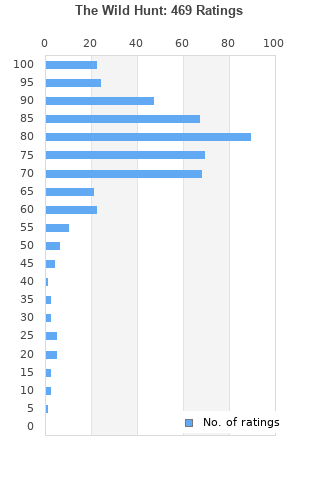 The Tallest Man On Earth bestography

The Wild Hunt is ranked as the best album by The Tallest Man On Earth. 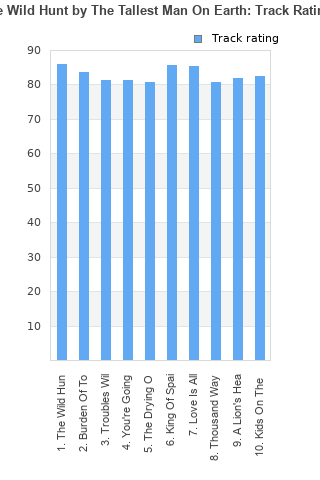 Rating metrics: Outliers can be removed when calculating a mean average to dampen the effects of ratings outside the normal distribution. This figure is provided as the trimmed mean. A high standard deviation can be legitimate, but can sometimes indicate 'gaming' is occurring. Consider a simplified example* of an item receiving ratings of 100, 50, & 0. The mean average rating would be 50. However, ratings of 55, 50 & 45 could also result in the same average. The second average might be more trusted because there is more consensus around a particular rating (a lower deviation).
(*In practice, some albums can have several thousand ratings)
This album is rated in the top 3% of all albums on BestEverAlbums.com. This album has a Bayesian average rating of 77.7/100, a mean average of 75.9/100, and a trimmed mean (excluding outliers) of 77.8/100. The standard deviation for this album is 16.0.

The wild hunt shows a lot of potential but unfortunately the lack of song variety or a cohesive theme prevents it from getting there.

I second the Dylan vibe. My first thought was... I already have a Dylan (and I'm not a big Dylan fan to begin with)... I probably don't need to spend time getting into this guy. But of course that is my opinion and I'm sure this guy blows your brain and you're the one marking this down.

For the music itself, nothing really was terribly memorable, but the quality was good. The guitar playing is a step above Dylan, and the belting vocals grasped my attention at times.

The beautiful melody and the raw emotive singing on 'burden of tomorrow' combines to create my highlight on the album. Overall, I love the 4 highest rated tracks and the others are pretty, but not particularly memorable.

Interesting that this guy sounds obviously very influenced by Dylan and yr a big Dylan fan.... The title track reminds of something on Blood on the Tracks... "Buckets of Rain" a bit, maybe... The picking, some phrasing, and overall vibe on third track "Troubles..." is total Dylan... reminds of "Boots of Spanish Leather" among many others... I'm a new comer to this guy... Obviously very talented but not really overly impressed...especially vocals seem too forced with contrived emotion and constant clever little entertaining flourishes I find distracting and tedious... comes across as sounding a little too desperate to be hip and it clashes with attempt to sound oh so laid back and relaxed, Dylanesque... Obviously he's young and a bit green... Might learn to chill out and just play and let it flow as he gets older and develops his chops... Anyway, sometimes it takes a few listens to hook me... I'll give it more time...

Fantastic album! I listen to this one quite often. MEZ

Your feedback for The Wild Hunt