The Age Of Adz (studio album) by Sufjan Stevens 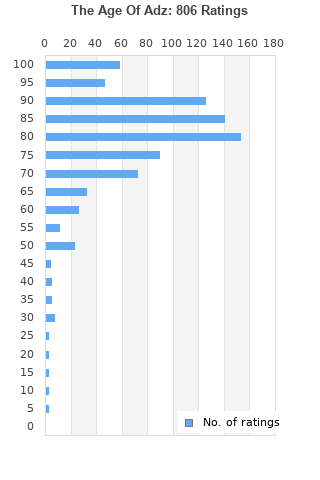 Sufjan Stevens - The Age Of Adz [CD]
Condition: Brand New
Time left: 3d 7h 37m 31s
Ships to: Worldwide
$16.92
Go to store
Product prices and availability are accurate as of the date indicated and are subject to change. Any price and availability information displayed on the linked website at the time of purchase will apply to the purchase of this product.  See full search results on eBay

The Age Of Adz is ranked 3rd best out of 20 albums by Sufjan Stevens on BestEverAlbums.com.

The best album by Sufjan Stevens is Illinois which is ranked number 45 in the list of all-time albums with a total rank score of 27,427. 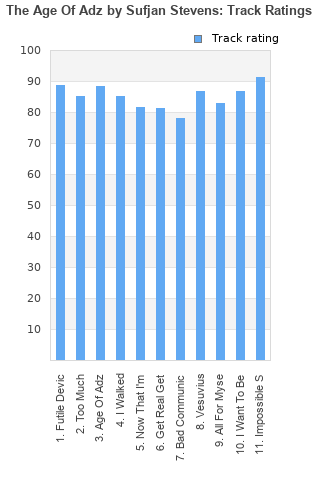 The Age Of Adz rankings

The Age Of Adz collection

The Age Of Adz ratings

Rating metrics: Outliers can be removed when calculating a mean average to dampen the effects of ratings outside the normal distribution. This figure is provided as the trimmed mean. A high standard deviation can be legitimate, but can sometimes indicate 'gaming' is occurring. Consider a simplified example* of an item receiving ratings of 100, 50, & 0. The mean average rating would be 50. However, ratings of 55, 50 & 45 could also result in the same average. The second average might be more trusted because there is more consensus around a particular rating (a lower deviation).
(*In practice, some albums can have several thousand ratings)
This album is rated in the top 2% of all albums on BestEverAlbums.com. This album has a Bayesian average rating of 80.1/100, a mean average of 78.9/100, and a trimmed mean (excluding outliers) of 80.2/100. The standard deviation for this album is 15.2.

The Age Of Adz favourites

The Age Of Adz comments

Better than Illinois, but not quite on the level of Carrie and Lowell. Has a lot of great songs such as 'Vesuvius', 'Too Much', ' I Walked', and 'Impossible Soul'. Those stand with Steven's best. Some songs on here dont quite reach those heights, but none are bad by any means. For what its worth, I rate Impossible Soul as his most impressive work. Surprisingly, his electronic sound is every bit as good as his banjo side or baroque-pop side.

Till this day...the best ever! Goat

The Kid A of the 2010s, arguably kicked off the trend (Reflektor, Bon Iver, Sleep Well Beast) of 2000s indie acts becoming more experimental and electronic

Sufjan seems to be trying something new in this one and It is definitely worth your time. It can be stunnenly beatiful sometimes, as for almost any Sufjan work really.

This album threw me off when I first heard it. It's so unlike what I expected from Sufjan. However, the more I listen to it, the more I love it. Tracks like Futile Devices, Age of Adz, and Vesuvius are great on their own, but the way everything plays together is what really makes this album special. That's not even getting into the best track on the entire album, Impossible Soul. It's a song that I can't really compare to anything else (well it's about the same length as Echoes by Pink Floyd). Sufjan takes listeners on a journey in that song, experimenting with sounds, genres and instruments. It's powerful, moving, and at times even a little frightening. When the electronics and synths finally fade away and we're left with Sufjan's voice and a simple acoustic guitar I always get chills.

Quite possibly the best candidate for "the modern Pet Sounds". Though its unorthodox compositions remind me more at times of another baroque pop classic, Forever Changes.

I would urge anyone coming to this album for the first time to listen at least three times. It takes a while to grasp. I thought it was mediocre at best my first listen and it is now in my top ten of all time

My God! This is really similar to Velocity Design Comfort by Sweet Trip. And like that record, this record owns so damn much.

Your feedback for The Age Of Adz