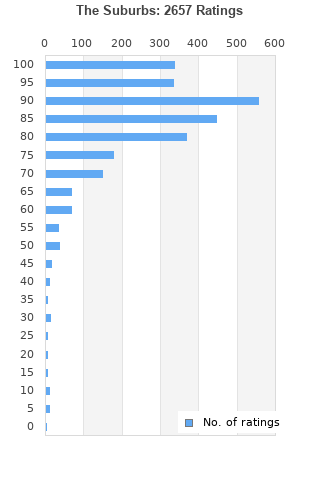 The Suburbs is ranked 2nd best out of 7 albums by Arcade Fire on BestEverAlbums.com.

The best album by Arcade Fire is Funeral which is ranked number 13 in the list of all-time albums with a total rank score of 51,652. 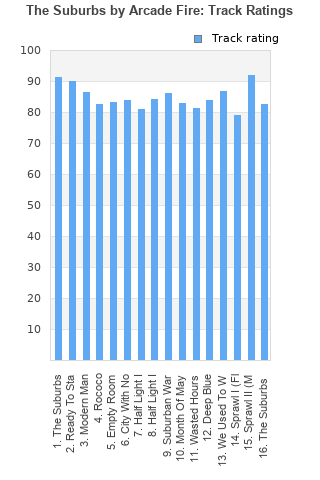 Rating metrics: Outliers can be removed when calculating a mean average to dampen the effects of ratings outside the normal distribution. This figure is provided as the trimmed mean. A high standard deviation can be legitimate, but can sometimes indicate 'gaming' is occurring. Consider a simplified example* of an item receiving ratings of 100, 50, & 0. The mean average rating would be 50. However, ratings of 55, 50 & 45 could also result in the same average. The second average might be more trusted because there is more consensus around a particular rating (a lower deviation).
(*In practice, some albums can have several thousand ratings)
This album is rated in the top 1% of all albums on BestEverAlbums.com. This album has a Bayesian average rating of 84.5/100, a mean average of 83.1/100, and a trimmed mean (excluding outliers) of 84.6/100. The standard deviation for this album is 15.4.

Another musical masterpiece from Arcade Fire that gives us so much content to explore and enjoy. Lyrically, this album is phenomenal with a clear theme running through the whole release that binds the record together. This makes for a very cohesive listen for us and when it is paired with this more pop style they are going for it makes for a very effective fusion. The guitars are brilliant on this record as well and lead the music in style on every track. The simple but effective song structure lays the foundation and then the group build on top of that each adding their own nuances and styles. This makes the album personal and more easily comprehensible to us making it their most accessible release. The way they blend one song to the next is staggering as well and they never break stride right up until the end. However, this is a bloated release and I do think the record over stays its welcome. Songs like Wasted Hours and Month Of May are skippable in my opinion and are only decent songs. There is quite a dip in form in the middle of the record which is rectified by the conclusion of the record but it still drags it down. Overall, a phenomenal release by Arcade Fire but I do think it has a few issues on here which keeps it away from being their greatest release.

One of the greatest alternative rock albums of the 21st century. Unbelievable lyrically and thematically and shows the power of greatly written guitar music that is presented in a way that has a unique quality that Arcade Fire can be proud of.

I live in the suburbs, so maybe this album should offend me. I can’t stay mad at Arcade Fire for long though.

One of the best bands at writing songs that send a clear message without being trite or obvious. Plus the backing power of a pseudo-symphony. Mountains Beyond Mountains is in the pantheon of great songs.

This record has a theme, lyrically and musically, and it’s superbly done.

The writing on this album is good as Arcade Fire usually is, but I find it less musically interesting than many of their other records. I still like the ambiance of this album, but I find it overrated.

Nowhere near the level of Funeral, but better than Neon Bible. There are some enjoyable tracks (City With No Children, Ready To Start, The Suburbs, Modern Man, Sprawl II) but they're not exceptional. I have to say, I really can't see what all the fuss is about with this album. I'm staggered that it's so high in the overall chart. Most of the album is mediocre.

Not quite the masterpiece that Funeral is, but a well constructed album with some single gems as well. The Suburbs definitely is a case of the whole being greater than the sum of its parts, though.

The best Arcade Fire have ever sounded. It's the most bold and broad blend of genres yet. Some moments remind me of U2, sometimes it reminds me a bit like My Bloody Valentine, all the great Irish bands. But as bold as this album is, it's also tight.

Your feedback for The Suburbs