Have One On Me (studio album) by Joanna Newsom 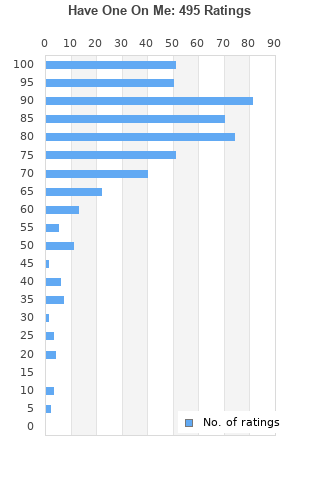 Joanna Newsom; Have One On Me
Condition: Very Good
$25.00

Have One On Me is ranked 2nd best out of 7 albums by Joanna Newsom on BestEverAlbums.com.

The best album by Joanna Newsom is Ys which is ranked number 180 in the list of all-time albums with a total rank score of 9,616. 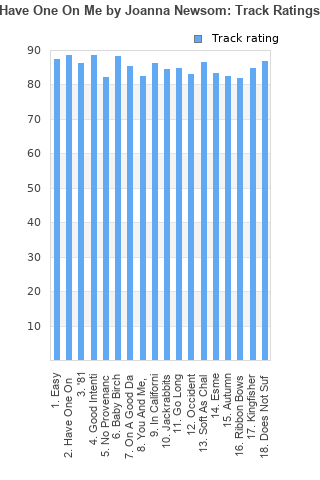 Have One On Me rankings

Have One On Me collection

Have One On Me ratings

Rating metrics: Outliers can be removed when calculating a mean average to dampen the effects of ratings outside the normal distribution. This figure is provided as the trimmed mean. A high standard deviation can be legitimate, but can sometimes indicate 'gaming' is occurring. Consider a simplified example* of an item receiving ratings of 100, 50, & 0. The mean average rating would be 50. However, ratings of 55, 50 & 45 could also result in the same average. The second average might be more trusted because there is more consensus around a particular rating (a lower deviation).
(*In practice, some albums can have several thousand ratings)
This album is rated in the top 1% of all albums on BestEverAlbums.com. This album has a Bayesian average rating of 81.1/100, a mean average of 79.6/100, and a trimmed mean (excluding outliers) of 81.3/100. The standard deviation for this album is 17.3.

Have One On Me favourites

Have One On Me comments

I was kind of disappointed. I want to like her music so bad but I just can’t. I love the harp, I love her voice, but all that extra instrumentation and extra song format is so unnecessary. If it was just her, a harp and nothing else making simple 3-5 minute songs, this would be a 100/100 album for me. I listened to it because Anthony Fantano aka theneedledrop rated this album top 20 out of 200 best albums of the decade 2010s and he has heard anything and everything for music. I was expecting something stripped down and beautiful but that was only half the case I suppose. I’m not a hater but I just think she’s not using all her tools in her toolbox to make the greatest album she possibly could. I’ll check out Divers next to see if it’s any different

If anybody can recommend me a harpist and singer songwriter that’s like Joanna, I’d be interested in hearing them. Thanks

A quite magnificent achievement. Up there with Black Star and Channel Orange as my favourite album from 2010 to 2019. So many classics with Easy, Good Intentions Paving Company and the California being my absolute faves.

Awesome album. This and Ys are some of the best albums of the 21st Century.

Favorites: Have One On Me, Good Intentions Paving Co., In California, Occident, Does Not Suffice.

Everytime I hear her voice, it reminds me of the movie "the strangers'

Have One on Me; Baby Birch; You and Me, Bess; and Does Not Suffice are perfect.

Any one of these three discs alone would be good enough to be album of the year. Put all three together, and there really isn't any doubt.

The last Joanna Newson album I heard was 2004's 'The Milk Eyed Mender ' when upon hearing it in a record shop I immediately purchased the CD . The thing about this album was THAT voice: screeching / abrasive/ ragged and so unique . I dunno why but I really liked that album

First things first this ...Triple Album is long , 2hours and 4 minutes long . Secondly its pretty much 2 hours of Harp Music so if you don't like Harp avoid this album

Listen 1 I'll be honest was some what of a slog BUT listen 2 was much easier as the tracks began to gel and grow on me .Unfortunately Joanna's catalogue is not available on SPOTIFY so both listens were on YOUTUBE making it difficult to cherry pick the best tracks , however I can confirm track 1 "Easy" , track 2 " Have One on Me" and the final track " Does Not Suffice " are rather excellent .

My only gripe is its too long and the middle section really meanders along , this album would have been AMAZING if 45 minutes had been left off . My plan is to purchase this triple CD and create a trimmed playlist of my fave tracks which I recon would come in at 1 hour

Some where in here is an incredible album

I get why people don't like Joanna Newsom. Her voice is jarring, her songs are long, and filled with overly pretentious lyrics. I get it. I've heard all these complaints every time I've tried to make my friends listen to her, or read anything on the internet about her.

But unlike a lot of people I think who grew to enjoy her music, I never went through a period of hating Joanna Newsom. I loved Peach Plum Pair the first time I heard it. I'm not trying to portray myself as some cool original fan, but more disclose that I was just never going to not like this album. Or any of her albums. I like her voice, I like her long complex songs, I like her pretentious lyrics.

This album, though, does hold a special place in my heart. There is something so emotionally raw about songs like Baby Birch and In California that really gets to me. '81 is a good song of hers to listen to if her voice annoyed you in her previous albums - it's particularly clear on this song, and more obviously melodic than at other points on the album. Perhaps her best vocal performance on the album in my opinion though is in Does Not Suffice (another nearly 7 minute long heartache, complete with a lovely refrain from In California that feels particularly emotionally satisfying). It's also more straightforward lyrically than something like Have One On Me. The album moves well from really rich arrangements, to more intimate harp pieces.

These are some of my favourite bits ! I love it all to be honest.

"I don't belong to anyone
My heart is heavy as an oil drum
And I don't want to be alone
My heart is yellow as an ear of corn
And I have torn my soul apart, from
Pulling artlessly with fool commands"

"Wolf-spider, crouch in your funnel nest,
If I knew you, once
Now I know you less
In the sinking sand
Where we've come to rest,
Have I had a hand in your loneliness?"

It's almost impossible to be critical of an album that has this much ambition. It's a stunning record that takes a while to seep into your soul, but once it does; like ys, it doesn't let go. A beautiful album of depth and imagination. We can only gape in wonder.

Isn't it interesting how if an artist with true talent can do this kind of music and it is fantastic... when other artists attempt this, it falls flat (not all, but many). She does it well.

Your feedback for Have One On Me