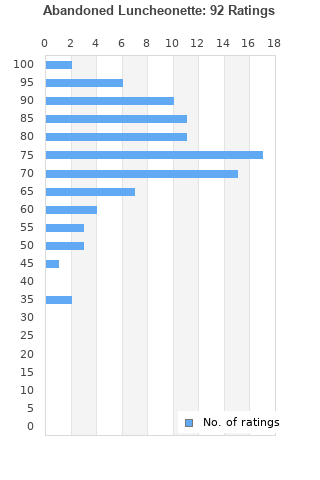 Hall and Oates 4 Original Albums H2O Big Bam Boom Abandoned Luncheonette LP LOT
Condition: Used
Time left: 4d 19h 30m 50s
Ships to: Worldwide
$9.99
Go to store
Product prices and availability are accurate as of the date indicated and are subject to change. Any price and availability information displayed on the linked website at the time of purchase will apply to the purchase of this product.  See full search results on eBay

Abandoned Luncheonette is ranked as the best album by Daryl Hall & John Oates. 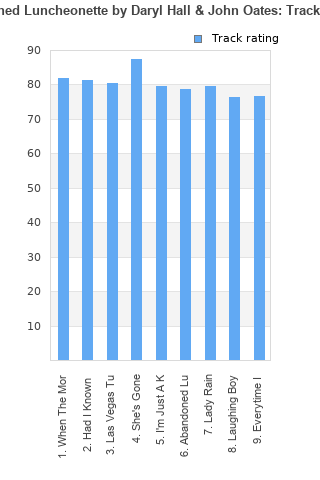 Rating metrics: Outliers can be removed when calculating a mean average to dampen the effects of ratings outside the normal distribution. This figure is provided as the trimmed mean. A high standard deviation can be legitimate, but can sometimes indicate 'gaming' is occurring. Consider a simplified example* of an item receiving ratings of 100, 50, & 0. The mean average rating would be 50. However, ratings of 55, 50 & 45 could also result in the same average. The second average might be more trusted because there is more consensus around a particular rating (a lower deviation).
(*In practice, some albums can have several thousand ratings)
This album is rated in the top 8% of all albums on BestEverAlbums.com. This album has a Bayesian average rating of 76.2/100, a mean average of 76.0/100, and a trimmed mean (excluding outliers) of 76.6/100. The standard deviation for this album is 13.6.

The album is not as bad as I'll make it sound but these are real issues.
The whole record sounds a like an white easy listening version of black soul.
It's a bipolar record where they try to do something sophisticated but also appeal to classy rich people by making it as inoffensive as it can be.
They try but they lack what Elton John has.
Also production of this record doesn't make any sense.
On a positive side, they got better as the years gone by and made some nice pop hits.

Outside of She's Gone I really don't care much for this album. Hall and Oates has some of my all time favorite songs, but they really don't have good albums

Your feedback for Abandoned Luncheonette