Red Sails In The Sunset (studio album) by Midnight Oil 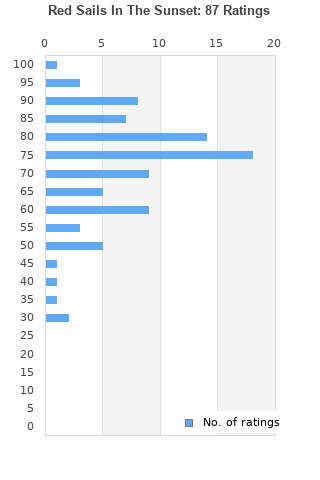 Red Sails In The Sunset is ranked 4th best out of 28 albums by Midnight Oil on BestEverAlbums.com.

The best album by Midnight Oil is Diesel And Dust which is ranked number 965 in the list of all-time albums with a total rank score of 1,922.

Listen to Red Sails In The Sunset on YouTube 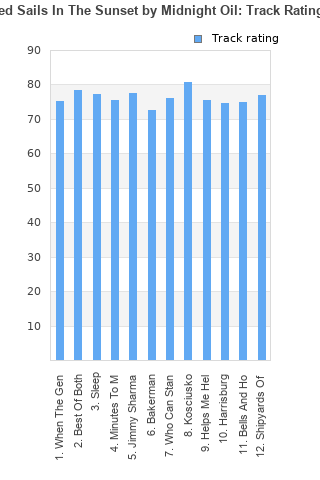 Red Sails In The Sunset rankings

Red Sails In The Sunset collection

Red Sails In The Sunset ratings

Rating metrics: Outliers can be removed when calculating a mean average to dampen the effects of ratings outside the normal distribution. This figure is provided as the trimmed mean. A high standard deviation can be legitimate, but can sometimes indicate 'gaming' is occurring. Consider a simplified example* of an item receiving ratings of 100, 50, & 0. The mean average rating would be 50. However, ratings of 55, 50 & 45 could also result in the same average. The second average might be more trusted because there is more consensus around a particular rating (a lower deviation).
(*In practice, some albums can have several thousand ratings)
This album has a Bayesian average rating of 72.5/100, a mean average of 72.5/100, and a trimmed mean (excluding outliers) of 72.5/100. The standard deviation for this album is 14.9.

Red Sails In The Sunset favourites

Red Sails In The Sunset comments

Midnight Oil are underrated as heck. Third favorite album of theirs. Becoming one of my favorite 80s bands for sure. Catchy, quite unique and fun as heck. His vocals and their style are addictive to my brain. One of those rare artists that impressed me right off the bat when I finally listened to them. Doesn't happen often but when it does I rank such an artist quite highly very quickly after first listen.

Following the mega huge 10.9.8.7.6.5.4.3.2.1 all of Australia held its collective breath for Midnight Oils next album which would be Red Sails In The Sunset and .....its a really good album ! . Some Oil fans were disappointed but not me , I recall loving this album upon release and I still do today . Easily Oils 3rd best Album behind Diesel and 10 to 1 .

The epitome of mid eighties nuclear age paranoia this is a angry, soaring rock feast. Brilliant variety and risk taking with the musical arrangements the Oils were firing on all cylinders creatively here.

A great, fiery, anthemic and left-wing rock record which is also a daring series of grafting experiments, with horn sections, clanking dance beats, banjo filigrees, and synthetic ghost-choirs hovering around the fringes like predatory cherubim.

midnight oil are very keen to experiment on this album and therefore the whole disc is quite surprising. not so bad, but somehow the songs seem to be a little distant. there are missing a few poignant moments.

Very strong set overall. It's the Harrisburg song which takes it further... that was creepy. Far more than 'Breathing' by Kate Bush. It's literally on another level altogether. Paranoid messages from the disaffected? No. This is a warning.

Your feedback for Red Sails In The Sunset