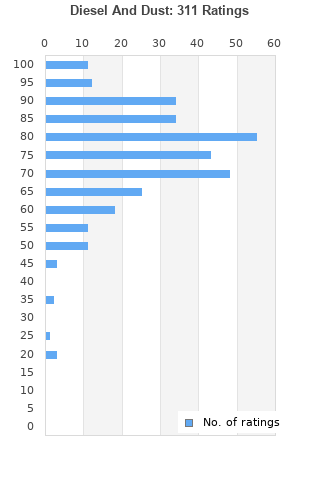 Diesel And Dust is ranked as the best album by Midnight Oil. 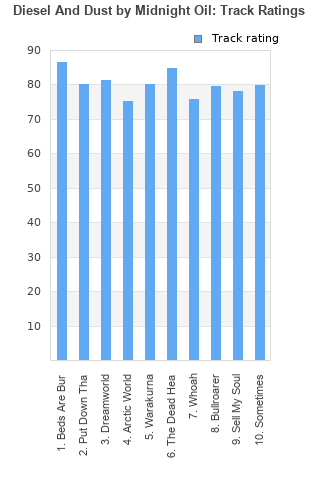 Rating metrics: Outliers can be removed when calculating a mean average to dampen the effects of ratings outside the normal distribution. This figure is provided as the trimmed mean. A high standard deviation can be legitimate, but can sometimes indicate 'gaming' is occurring. Consider a simplified example* of an item receiving ratings of 100, 50, & 0. The mean average rating would be 50. However, ratings of 55, 50 & 45 could also result in the same average. The second average might be more trusted because there is more consensus around a particular rating (a lower deviation).
(*In practice, some albums can have several thousand ratings)
This album is rated in the top 8% of all albums on BestEverAlbums.com. This album has a Bayesian average rating of 75.7/100, a mean average of 74.9/100, and a trimmed mean (excluding outliers) of 75.8/100. The standard deviation for this album is 14.5.

I liked this album more than I thought I would. It's more than Beds Are Burning.

I loved Beds Are Burning as a single way back at the time but only got to give this album a listen in 2022. To be honest I was a little disappointed as I don't think the other tracks reached the same level and I had anticipated finding a few gems. Overall it isn't bad, but not one I expect to return to too often

This is a record that I never really connected with in terms of its music and sound and I still struggle to really relate to it now. It lacks the edge and the power of records in its genre and feels a bit lacklustre on the whole. This may be due to the simplicity of the instrumentation or because there isn't a load to really get stuck into on here. Most songs are pretty similar and you do get bored of the style by the time you reach the conclusion of the record. I am not a major fan of the voice as well as it seems a bit generic for me. However, there are a few great tracks on here such as The Dead Heart and Warakurna which make this record worthwhile just for those two. Also, I think the lyrics of this album are a major strength as well as they have a good message and are well written. It isn't preachy but the message is clear and you can't miss it. Overall, I just could never connect with the music on here and I found the sound quite boring but I can see why so many people love it.

Didn't really connect with much of it, being a dumb American, but Beds Are Burning (and this album in general) is a classic in my opinion

Good album to listen once in a while. Bought it because of Beds are burning. That song is a true classic!

I went through a period of loving Aussie rock so much back in the late eighties that I wound up spending my junior year of college in Perth. Of all those Australian bands that I loved back then, Midnight Oil was probably the best, and is the one that has had the most staying power for me. They made a number of good albums, but Diesel and Dust was their best. It brings together the guitar-driven, punk sensibilities of their earlier albums with the more meticulously produced, more obviously political, more mainstream later works. "Beds Are Burning" was the hit single from this album, but I think "The Dead Heart," also released as a single, is even better: a moving, beat-driven meditation on the theft of land from the continent's aboriginal people.

A great Australian album that confronts the lack of respect for Indigenous Australians who are the real owners of this great country for thousands of years. Belter tracks throughout from Bed Are Burning to Dreamworld to The Dead Heart and finishing in great fashion with Sometimes. A great album for all.

Has been rated as he best ever Australian album. Whilst it would not be my favourite, it's hard to argue otherwise. In so many ways it is the quintessential Aussie album.

Great album, no bad tracks, Sometimes, Bullroarer and The Dead Heart are classics. What happened to Gunbarrel Highway?

As far as I know, it is the best Australian album. Beds are Burning is still as fantastic a song as it ever was, really one of the best hit singles there's ever been and pretty much every other track is really good.

Your feedback for Diesel And Dust