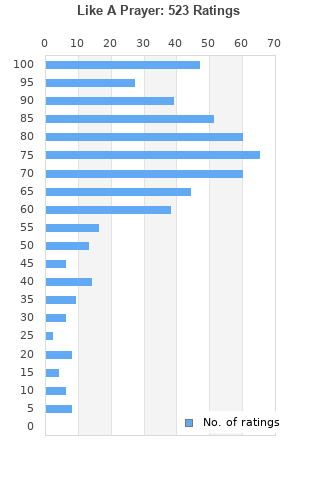 Like A Prayer is ranked 2nd best out of 26 albums by Madonna on BestEverAlbums.com.

The best album by Madonna is Ray Of Light which is ranked number 641 in the list of all-time albums with a total rank score of 2,910. 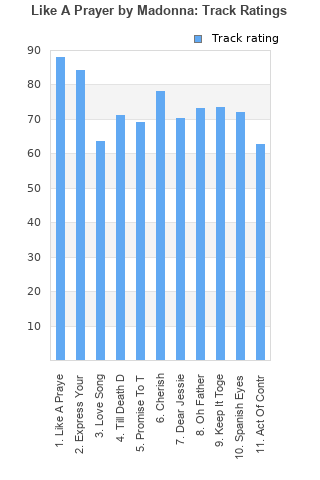 Rating metrics: Outliers can be removed when calculating a mean average to dampen the effects of ratings outside the normal distribution. This figure is provided as the trimmed mean. A high standard deviation can be legitimate, but can sometimes indicate 'gaming' is occurring. Consider a simplified example* of an item receiving ratings of 100, 50, & 0. The mean average rating would be 50. However, ratings of 55, 50 & 45 could also result in the same average. The second average might be more trusted because there is more consensus around a particular rating (a lower deviation).
(*In practice, some albums can have several thousand ratings)
This album has a Bayesian average rating of 72.4/100, a mean average of 71.3/100, and a trimmed mean (excluding outliers) of 72.4/100. The standard deviation for this album is 21.7.

Express Yourself is criminally underrated, and its strong rhythm and confident melody are what I find more appealing than those of Like a Prayer.

I can't get past wondering how much stronger this might have been if Madonna had been able to commit to the Prince influence throughout.

There is not much here besides the first track., which of course is her biggest song by far. Overall, 55/100.

Amazing album that redefined pop at the time!

The first track is a classic, the second a good song, the rest is not up to much.

Great fun progressive album. + has Prince in it! (How could they go wrong?)

Certainly better than a lot of modern pop albums

In the middle, grey, good and bad