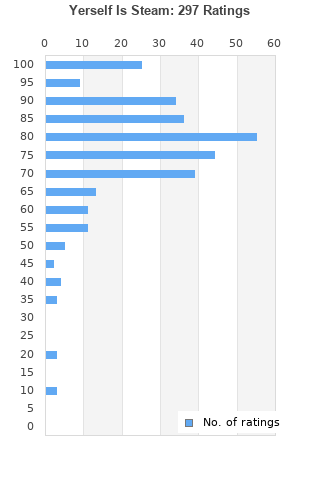 Yerself Is Steam is ranked 2nd best out of 18 albums by Mercury Rev on BestEverAlbums.com.

The best album by Mercury Rev is Deserter's Songs which is ranked number 666 in the list of all-time albums with a total rank score of 2,841. 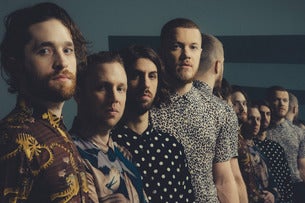 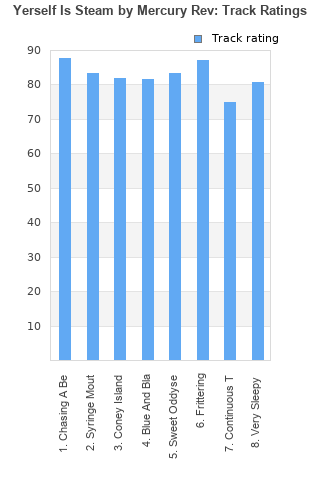 0
7.
Continuous Trucks And Thunder Under A Mother's Smile
Rating: 74 (43 votes)Comments:

Rating metrics: Outliers can be removed when calculating a mean average to dampen the effects of ratings outside the normal distribution. This figure is provided as the trimmed mean. A high standard deviation can be legitimate, but can sometimes indicate 'gaming' is occurring. Consider a simplified example* of an item receiving ratings of 100, 50, & 0. The mean average rating would be 50. However, ratings of 55, 50 & 45 could also result in the same average. The second average might be more trusted because there is more consensus around a particular rating (a lower deviation).
(*In practice, some albums can have several thousand ratings)
This album is rated in the top 4% of all albums on BestEverAlbums.com. This album has a Bayesian average rating of 77.7/100, a mean average of 76.8/100, and a trimmed mean (excluding outliers) of 77.9/100. The standard deviation for this album is 15.9.

Shoegaze with a bit of desert rock mixed in. This sounds really similar to a couple early 90s Flaming Lips albums, namely Hit to Death in the Future Head.

This is an album that you can definitely tell is near the start of the artists career. There are some fantastic moments on this record like Chasing A Bee, Syringe Mouth and the 8 minute epic of Frittering. The rest of the songs just aren't up to this level but are still decent and the ideas are present in the music but I just don't think they are fully realised in the tracks. The instrumentation is very impressive throughout though and is a high point for me. Overall this is a good record with glimpses of greatness scattered throughout.

I know it is a bonus track or whatever, but I wish Car Wash Hair was listed. It is one of the best songs on the album!

This is, as far as I know, pretty unique music. Very psychedelic mix of melody and noise.
There are some genius moments on here. However at other times I wonder why I am listening. Probably a bit too much of 'noise' for me all the way through. But then again, sometimes this album really amazes me.

It's good. If it would have ended at Frittering, it would have been great. Very Sleepy River, was very f**king long, and not really any tonal shifts to keep it interesting. I don't know if Car Wash Hair is considered it's own track, but if so, it'd be one of my favorites on the album.

My favorite Mercury Rev album. It's not as poppy as Deserter's Songs and honestly, the guitar work is just breathtaking considering this came out in the same year as Loveless.

The years between the 80s and the 90s were historically crucial for the birth of a vaste range of new rock styles: noise, indie, shoegaze, brit pop, grunge... Yerself Is Steam is in the right middle of all this stuff and, thanks to Mercury Rev's recognizable psychedelic influence, is also one of the most important episodes in the development of rock music during this age. It sounds cathartic.

Same band, different sounds...If you are coming here after listening to "Deserter's Songs", well these are a different set of songs more in the realm of rock than that of pop music, still as good - as long as you are prepared for it and have adjusted your expectations...

chasing a bee is fantastic and Frittering is one of my all time favorites. the rest of the album while still good can't match the level of those two songs. still overall a very interesting album.

Your feedback for Yerself Is Steam