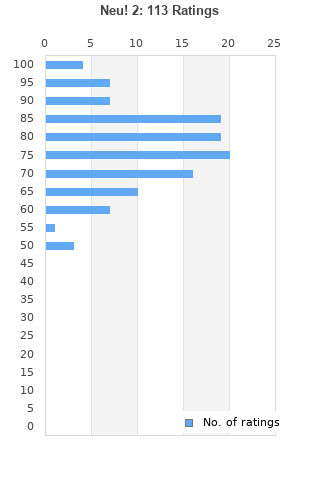 Neu! 2 is ranked 3rd best out of 7 albums by Neu! on BestEverAlbums.com.

The best album by Neu! is Neu! which is ranked number 857 in the list of all-time albums with a total rank score of 2,153.

Cuffing Season: Will You Go To Prom With Me?
The Regent Theater, Los Angeles, United States. 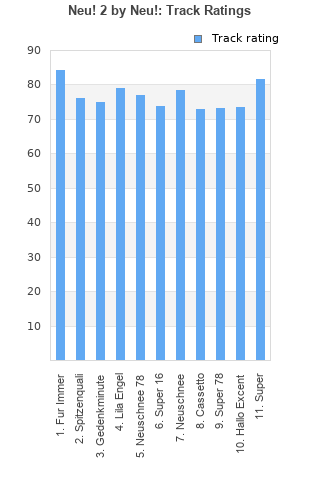 Rating metrics: Outliers can be removed when calculating a mean average to dampen the effects of ratings outside the normal distribution. This figure is provided as the trimmed mean. A high standard deviation can be legitimate, but can sometimes indicate 'gaming' is occurring. Consider a simplified example* of an item receiving ratings of 100, 50, & 0. The mean average rating would be 50. However, ratings of 55, 50 & 45 could also result in the same average. The second average might be more trusted because there is more consensus around a particular rating (a lower deviation).
(*In practice, some albums can have several thousand ratings)
This album is rated in the top 4% of all albums on BestEverAlbums.com. This album has a Bayesian average rating of 77.5/100, a mean average of 77.9/100, and a trimmed mean (excluding outliers) of 77.9/100. The standard deviation for this album is 11.1.

Rumor would have it that they didn`t had enough material for an whole album, so they recorded some tracks withe differnt speed....

A fragmented album lacking the viscerality and atmosphere of its brilliant predecessor, but the vitality remains if not increases. Murky, gloopy sound effects are replaced with loud, joyous guitar riffs and the record (with its more accessible track lengths) is a pleasure to listen to.

Not a masterpiece like "Neu!"('72), but still an artful & great record in its own right. My personal favourite tracks are the frenetic "Super" and "Super 78".

They ran out of money and by necessity had to use the tapes from their debut record to finish this one. The result being an ingenious utilization of the studio as a instrument. The influence of this record is still being felt today.

The minimilist structure and repetitive rhythm of the album is closer to "Sister Ray" than their seminal debut. The percussion is relentless amongst distorted guitar sounds which trump melody. The latter is effectively abandoned in favour of an eerie narrow expressiveness. The album contains versions of songs at different speeds which by accident or design resulted in Neu becoming one of the first to utilize the technique known as "remixing".

I disagree..this is a great album- an rhythmic/experimental success. Other than Neu, I can only think of Talking Heads whose opening trilogy of albums were classics. Of the three, Neu75 is the most disappointing - still very good but a bit bland.

Was hoping someone would add this with the new 100 lists. I remember listening to this thinking it was the most empty pointless album ever. Just wanted to diss it. Neu! (75) is so good, you wonder why this happened...

Your feedback for Neu! 2