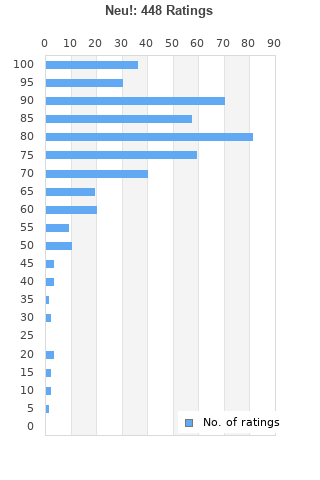 Ahle: Selected Vocal Music - 'Neu-gepflanzte Thüringische Lust-Garten' /Bach Col
Condition: Very Good
Time left: 1h 34m 42s
Ships to: Worldwide
£6.98
Go to store
Product prices and availability are accurate as of the date indicated and are subject to change. Any price and availability information displayed on the linked website at the time of purchase will apply to the purchase of this product.  See full search results on eBay

Neu! is ranked as the best album by Neu!. 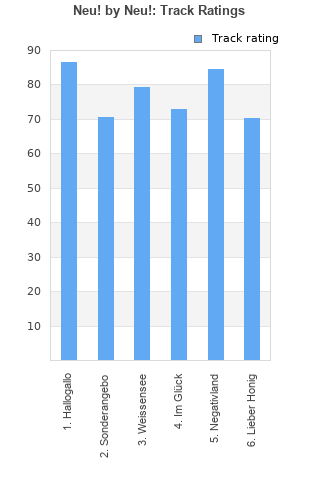 Rating metrics: Outliers can be removed when calculating a mean average to dampen the effects of ratings outside the normal distribution. This figure is provided as the trimmed mean. A high standard deviation can be legitimate, but can sometimes indicate 'gaming' is occurring. Consider a simplified example* of an item receiving ratings of 100, 50, & 0. The mean average rating would be 50. However, ratings of 55, 50 & 45 could also result in the same average. The second average might be more trusted because there is more consensus around a particular rating (a lower deviation).
(*In practice, some albums can have several thousand ratings)
This album is rated in the top 2% of all albums on BestEverAlbums.com. This album has a Bayesian average rating of 80.3/100, a mean average of 79.1/100, and a trimmed mean (excluding outliers) of 80.5/100. The standard deviation for this album is 15.8.

Much like every other krautrock album ever made, Neu! is very hypnotic. It's very impressive how much bands like Neu! are able to do with what little they allow themselves. It's music to listen to in pretty much any situation I can think of myself in. I can’t help but think it must be very boring to be the drummer in this band.

And they call prog rock pretentious...
In all seriousness, I can appreciate that Neu! confounded traditional pop/rock convention at a time when it wasn't popular to do so. But beyond that there's not enough here that's interesting or attention grabbing to me to keep me coming back.

Neu starts out with an enjoyable acoustic track but then becomes only white noise.

The record is dark, atmospheric and industrial and it most certainly held my interest; it feels like going on several rides in an abandoned amusement park. A brilliant piece of art that has stood the test of time, like so much of krautrock.

An experimental album that jives with me.

Hallogallo is fantastic, and Negativland is great, but the long songs of just sound effects kinda ruin it for me. In some albums and songs, the feedback and sound effects add a lot to the song, but here it just seems like filler. It's not bad though. If the whole album were more songs like the two I mentioned above, this would be a fantastic album.

Your feedback for Neu!