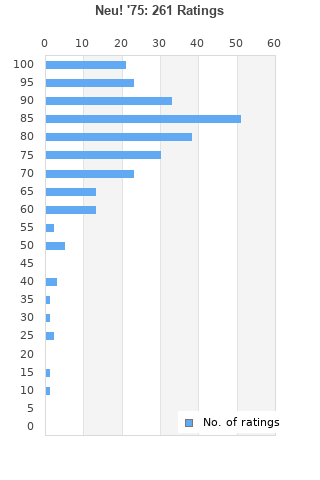 Neu! '75 is ranked 2nd best out of 7 albums by Neu! on BestEverAlbums.com.

The best album by Neu! is Neu! which is ranked number 882 in the list of all-time albums with a total rank score of 2,103. 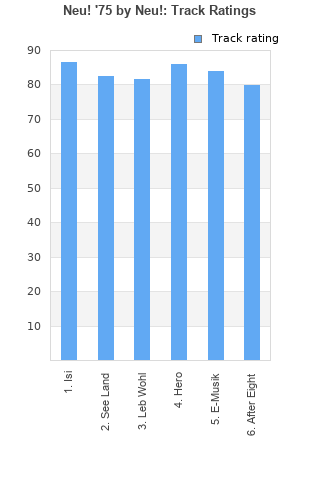 Rating metrics: Outliers can be removed when calculating a mean average to dampen the effects of ratings outside the normal distribution. This figure is provided as the trimmed mean. A high standard deviation can be legitimate, but can sometimes indicate 'gaming' is occurring. Consider a simplified example* of an item receiving ratings of 100, 50, & 0. The mean average rating would be 50. However, ratings of 55, 50 & 45 could also result in the same average. The second average might be more trusted because there is more consensus around a particular rating (a lower deviation).
(*In practice, some albums can have several thousand ratings)
This album is rated in the top 1% of all albums on BestEverAlbums.com. This album has a Bayesian average rating of 80.6/100, a mean average of 79.7/100, and a trimmed mean (excluding outliers) of 80.9/100. The standard deviation for this album is 15.0.

A record that is a tale of two sides with one being extremely mellow and delicate and the other being aggressive and loud. This contrast works brilliantly in my opinion and it makes both sides stand out more effectively. It benefits the second half a lot more with songs like Hero sounding far more edgy than they actually are. This is mainly due to the beauty that we get before this half which is by far the better side of the record for me. Those first two songs are phenomenally composed and for me they are NEU!'s two greatest songs ever. The opener Isi is just stunning with the keyboard really standing out for me. It opens the record perfectly and puts you straight into a relaxed mood. This is all then repeated on the second song before a slight dip in quality on track 3. After that your onto side 2 where you are greeted by strange vocals and a frantic energy that sticks through all three songs. This side is still very strong but the first half steals the show for me. Overall, this is a beautiful but troubled album where the tensions of a group where seeping through making for a fantastic release for us to enjoy.

A good record but they were running out of new ideas.
Some interesting epic/emotional melodies but nothing outstanding.

This was the blueprint for milestones from Stone Roses or Oasis!

Starts out much mellower than anticipated, which makes the second half feel more aggressive than it really is.

Kraftwerk's and Can one whole night of love with a rolling stones record playing on the background.

An impressive album of two halves. The first half is more chilled out and ambient, which is a surprise, but Neu manage to pull it off because the three tracks are all beautiful and consistently interesting. The second half is their punk-rock moment, filled with 3 energetic tracks reminiscent of the better tracks on "Neu! 2". Both sides are great pieces of work and the album never falls flat. A complete treasure and a wonderful goodbye from Neu!

Better than the debut

Material, production and creativity are at it's zenith on this record. Their influence is still being heard today.