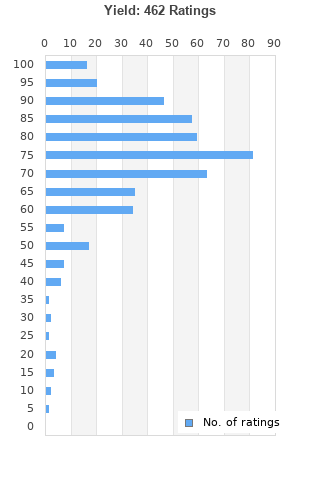 Yield is ranked 4th best out of 80 albums by Pearl Jam on BestEverAlbums.com.

The best album by Pearl Jam is Ten which is ranked number 50 in the list of all-time albums with a total rank score of 22,208. 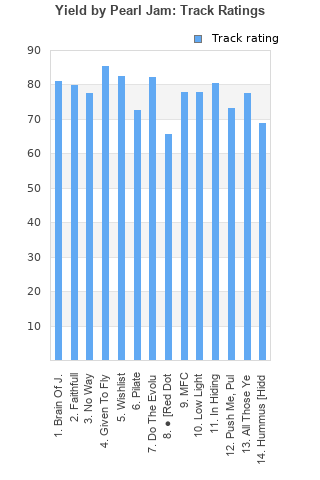 Rating metrics: Outliers can be removed when calculating a mean average to dampen the effects of ratings outside the normal distribution. This figure is provided as the trimmed mean. A high standard deviation can be legitimate, but can sometimes indicate 'gaming' is occurring. Consider a simplified example* of an item receiving ratings of 100, 50, & 0. The mean average rating would be 50. However, ratings of 55, 50 & 45 could also result in the same average. The second average might be more trusted because there is more consensus around a particular rating (a lower deviation).
(*In practice, some albums can have several thousand ratings)
This album is rated in the top 12% of all albums on BestEverAlbums.com. This album has a Bayesian average rating of 75.1/100, a mean average of 73.8/100, and a trimmed mean (excluding outliers) of 75.2/100. The standard deviation for this album is 16.1.

I've found all Pearl Jam albums after 'V's' seems to have a similar structure. There's between 2-4 songs that are absolute gold. But then the rest of the album are mainly mediocre tracks that just plod along. This is another that falls into that category. Good album, just not a great one.

Not up to the standard of Ten and Vs, but still a good album. My favourites are Brain of J and In Hiding. There's a b-side track called Leatherman off the Given To Fly single which is good too.

A great bounceback album after No Code was a bit of a disappointment.

I like this album overall but I can’t help but feel they went in a pretty straightforward direction here apposed to there last few releases. The best tracks by quite a margin are Wishlist and the amazing Do the Evolution which go against the by the numbers feel of the rest of the album.

This is a great album. Pearl Jam makes a comeback after slipping a bit from No Code.

Given To Fly and In Hiding are great with their powerful choruses, but Wishlist is the true gem of this album.

This is such a fantastic album one of my favs i was surprised by it.. such good tracks on here, i definitely prefer this one over Vitalogy (never understood the hype around it) and Vs.

A fantastic album and one I’ve listened to consistently for years. I never thought VITALOGY would ever be matched by PJ but I can’t split them. IMO Yield is every bit as good as VITALOGY. This album is so consistent with not a single low point across 13 tracks. Sadly this would be the last PJ album I’d fall in love with but wow their Trilogy of Ten , VITALOGY and Yield stands testiment to a wonderful career. Most bands can hope to have 1 great album, but 3 great albums is extremely rare. Pearl Jam have done it

Your feedback for Yield