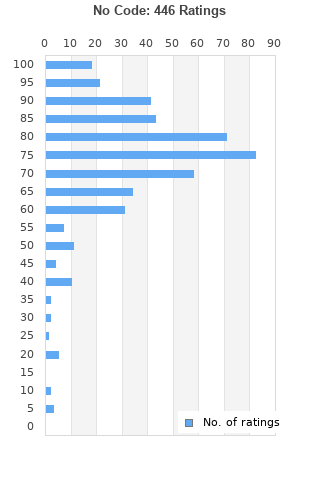 PEARL JAM LOT SET YIELD LOST DOGS BINAURAL RIOT ACT NO CODE AUTHENTIC CD ALBUM
Condition: Very Good
Time left: 7h 1m 45s
Ships to: Worldwide
$29.99
Go to store
Product prices and availability are accurate as of the date indicated and are subject to change. Any price and availability information displayed on the linked website at the time of purchase will apply to the purchase of this product.  See full search results on eBay

No Code is ranked 5th best out of 80 albums by Pearl Jam on BestEverAlbums.com.

The best album by Pearl Jam is Ten which is ranked number 50 in the list of all-time albums with a total rank score of 24,770. 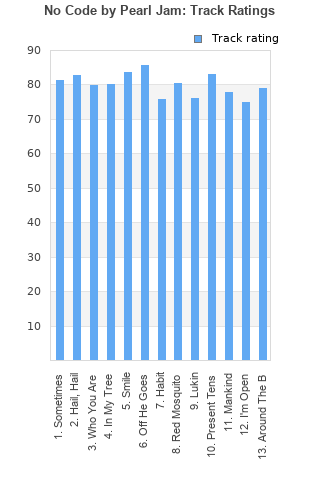 Rating metrics: Outliers can be removed when calculating a mean average to dampen the effects of ratings outside the normal distribution. This figure is provided as the trimmed mean. A high standard deviation can be legitimate, but can sometimes indicate 'gaming' is occurring. Consider a simplified example* of an item receiving ratings of 100, 50, & 0. The mean average rating would be 50. However, ratings of 55, 50 & 45 could also result in the same average. The second average might be more trusted because there is more consensus around a particular rating (a lower deviation).
(*In practice, some albums can have several thousand ratings)
This album is rated in the top 15% of all albums on BestEverAlbums.com. This album has a Bayesian average rating of 75.2/100, a mean average of 74.0/100, and a trimmed mean (excluding outliers) of 75.3/100. The standard deviation for this album is 16.4.

Opener Sometimes is low key and a nice contrast to all previous openers, Hail Hail is probably my favourite song here, the upbeat songs tend to be great in fact, Smile reminds me a lot of Neil Young, Red Mosquito and Lukin are both great as well, Habit is a little straightforward but decent. Some great slower, more reflective cuts in Off he Goes and Present Tense as well.

There are some moments that bog the album down though Who You Are, I’m Open and Round The Bend don’t really do much for me and Mankind is a song I still don’t know if I love or hate.

Definitely check this one out , probably be something you’ll like on here as it’s a really diverse record.

This album was the dividing line of Pearl Jam’s studio work. Their first 3 albums had enough radio friendly hits to keep the huge bandwagon fans and hype surrounding the band. This album at the time was a disappointment for myself included. Now that I look back at it the album is very good. It was a deep breath for the band a more mature recording. The 1st half at least should have been satisfying enough for bandwagons but they moved on to something else and Pearl Jam continued on this path for the foreseeable future making solid respectable work.

One of the best Pearl Jam album

In Ten, Vs, and Vitalogy PJ rushed with anguish through social and personal conflicts.

This is an album based on sound exploration and a more metaphysical pondering. You've seen them experience life and now is time to consider their approach to it.

I love this album.

Their most diverse album, which also marked a significant change of style after the first 3 more classick rock inspired releases. It's a very good and consistent album, although lacking in killer songs.

so underrated it hurts

It may not be a great album or a classic PJ one, but it still sounds good and it has a beautiful sound. The biggest problem is that No Code lacks of killer tracks like Alive, Rearviewmirror or Corduroy

Your feedback for No Code