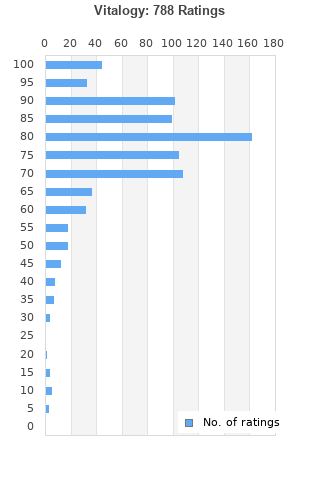 Vitalogy is ranked 3rd best out of 80 albums by Pearl Jam on BestEverAlbums.com.

The best album by Pearl Jam is Ten which is ranked number 51 in the list of all-time albums with a total rank score of 22,458. 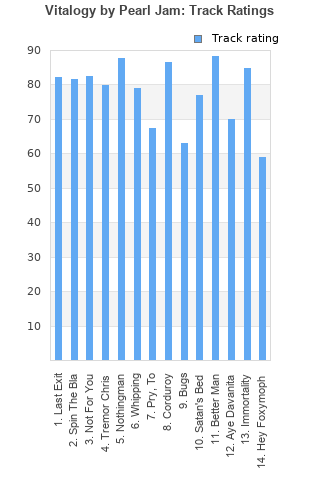 Rating metrics: Outliers can be removed when calculating a mean average to dampen the effects of ratings outside the normal distribution. This figure is provided as the trimmed mean. A high standard deviation can be legitimate, but can sometimes indicate 'gaming' is occurring. Consider a simplified example* of an item receiving ratings of 100, 50, & 0. The mean average rating would be 50. However, ratings of 55, 50 & 45 could also result in the same average. The second average might be more trusted because there is more consensus around a particular rating (a lower deviation).
(*In practice, some albums can have several thousand ratings)
This album is rated in the top 3% of all albums on BestEverAlbums.com. This album has a Bayesian average rating of 77.7/100, a mean average of 76.6/100, and a trimmed mean (excluding outliers) of 77.8/100. The standard deviation for this album is 15.4.

This album never really connected with me like Ten, Vs or No Code. There are some good songs on the album (Better Man, Immortality and Not For You being my highlights) but there are also some godawful tracks that are really hard to listen to and just bring down the album for me (Stupidmop, Bugs and Aye Davanita). Remove those 3 and it'd probably be a 50/100 for me.

A Lot of KILLER and a whole bunch more FILLER!

I ove this album, it's amazing

If we forget about those weird interludes, it is quite a good album.

Nowhere near as good as Ten or Vs., but still good.

Interestingly, I have the opposite opinion to Strangel while still scoring the album the same rating, in that I really enjoy the unusual sections (especially Bugs & Aye Davanita) and skip the sappy ballads with "man" in the title. Immortality is great, tho'. Best song: Tremor Christ. Overall Vitalogy is easily Pearl Jam's best: raw organic production, worthwhile experimentations and take away the man-songs and you've got a piece of work which never gets old (unlike Ten). Even the CD booklet is memorable.

This is an interesting album to try and assess. The best songs are some of PJ’s very best. Corduroy, and Immortality still pull me in like the day I first bought the album. Nothingman and Better Man are grunge’s version of Paul McCartneyesque ballads of the unseen life of the everyday person and done with far more cutting grit. Not For You, Last Exit, Spin the Black Circle etc. are PJ at their grunge-rocking best before dad-rockism seemed to take away much of their rocking cred. But then there’s the strange interlude tracks and nonsensical closer that goes on and on and on. In a way it actually adds to the character of the album but even the biggest PJ fans would admit to hitting the skip button too many times to avoid another listen to those oddities.

A hungry and energetic album with a few quirky moments to boot. A very good record.

Your feedback for Vitalogy