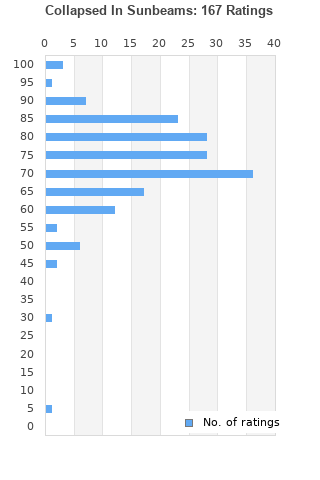 Collapsed In Sunbeams is ranked as the best album by Arlo Parks. 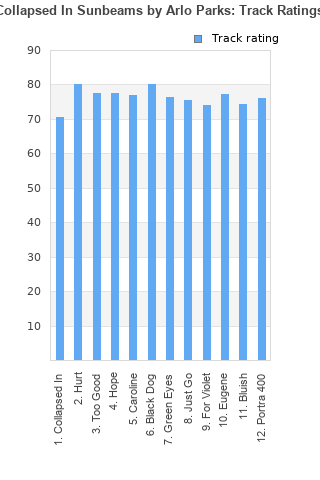 Rating metrics: Outliers can be removed when calculating a mean average to dampen the effects of ratings outside the normal distribution. This figure is provided as the trimmed mean. A high standard deviation can be legitimate, but can sometimes indicate 'gaming' is occurring. Consider a simplified example* of an item receiving ratings of 100, 50, & 0. The mean average rating would be 50. However, ratings of 55, 50 & 45 could also result in the same average. The second average might be more trusted because there is more consensus around a particular rating (a lower deviation).
(*In practice, some albums can have several thousand ratings)
This album has a Bayesian average rating of 73.8/100, a mean average of 73.1/100, and a trimmed mean (excluding outliers) of 73.9/100. The standard deviation for this album is 12.3.

Truly a wonderful listen. Beautiful, eloquent, and full of vibrant imagery. I love that each song is inspired by different poems she wrote or was inspired by. Nothing truly jaw dropping here but just so incredibly enjoyable and consistent start to finish. This just might be a strong contender for my AOTY so far, granted the first half of 2021 was pretty disappointing for music but this was just so damn pleasant. 8.5/10

It's a lovely album and her vocals are pleasant and seductive. Her lyrics are poetic.

I can't help the feeling I've heard all about it before, I didn't manage to find any unique aspects that would make it memorable. This includes sound (both the poppier and the R&B elements) and especially lyrics/vocals. Still, its charm is undeniable, it was catchy and enjoyable - as pop music should be.

Really good record. Lyrically interesting and the vibe is so laid back.

75 to 80/100 (Beautiful, assured and uplifting debut from this British singer and songwriter. Full of subtle and honest and understanding and warm soulful pop songs. She's now one of the most exciting young artists that I look forward to hearing all her releases going forward for years to come.)

This is a very good debut. Its a really delicate and beautifully composed bedroom pop/singer-songwriter album full of songs that quite directly address the realities of depression and anxiety. Arlo Parks never feels the need to be over-the-top in the slightest in her songwriting or vocal performances, but instead keeps an even keel and quite calmly and directly tackles these subjects and songs with a definite sense of dignity and honesty which I really appreciate.

Her voice is good, again, never over the top, but so assured and so real. The instrumentals are also never lavish nor ever austere, they are right there in the middle, with lots of keyboard touches and simple and effective drums and guitars. - Oh and some really REALLY catchy melodies. The lyrics are generally simple and straight-forward but at times really strike a nerve. For me, they may not hit home as hard as I imagine they will for many, many other listeners. I imagine this album will be a hugely positive piece of art for tens of thousands of people, young and old, across the world. Though very young, Arlo Parks does provide a reassuring, understanding, voice that is great to hear.

There are standouts here, namely the run of songs that happen in the middle, "Hope", "Caroline", "Black Dog", and "Green Eyes" are excellent! Also I liked "Eugene" "Hurt" and several others. The album as a whole isn't, for me, a total game changer or a new favorite. But perhaps its just that I haven't yet given it enough time to really sink in. However, I will say, at this time there are very few musicians that I am as excited to watch develop through their careers and very few musicians that seem to have the subtle talents and the songwriting chops of Arlo Parks.

Pleasantly surprised with this one

It's like a better-produced version of "When Your Grow Up" by Priscilla Ahn, hopefully Arlo's career goes farther than Priscilla's though (she seemed to fall off the map). It's a really relaxed sound, almost as if someone was singing pop music to you in their kitchen or bedroom (and yes, I am aware that it's listed as "bedroom pop" on wikipedia, but what can I say? It's a very accurate descriptor for this kind of sound!). Catchy, yet with no bombastic production like most pop music. It's a studio album built to sound like a pop star re-recording hits in an unplugged format. Hopefully its score gets a bit closer to the 75-80 range, I'm a bit sad to see it in the lower 70s as of this writing when it is clearly better than average to my ears.

Your feedback for Collapsed In Sunbeams