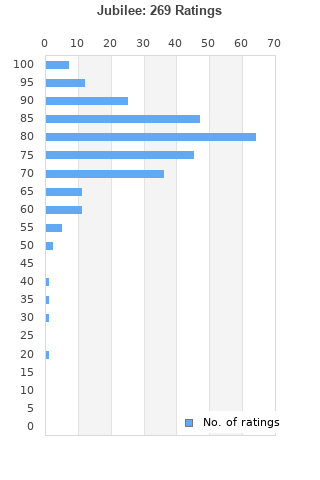 Japanese Breakfast Jubilee Ltd Indies CLEAR W. TURQUOISE SWIRL Vinyl LP New
Condition: New
Time left: 2d 3h 49m 23s
Ships to: Worldwide
£29.99
Go to store
Product prices and availability are accurate as of the date indicated and are subject to change. Any price and availability information displayed on the linked website at the time of purchase will apply to the purchase of this product.  See full search results on eBay

Jubilee is ranked 3rd best out of 3 albums by Japanese Breakfast on BestEverAlbums.com.

The best album by Japanese Breakfast is Soft Sounds From Another Planet which is ranked number 3387 in the list of all-time albums with a total rank score of 431. 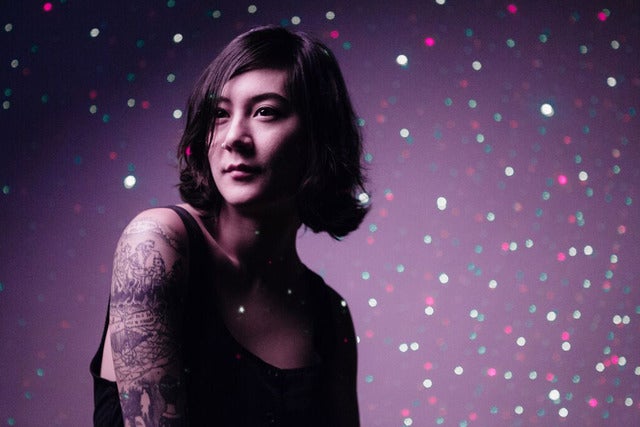 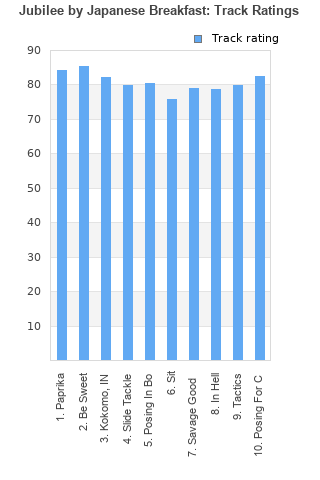 Rating metrics: Outliers can be removed when calculating a mean average to dampen the effects of ratings outside the normal distribution. This figure is provided as the trimmed mean. A high standard deviation can be legitimate, but can sometimes indicate 'gaming' is occurring. Consider a simplified example* of an item receiving ratings of 100, 50, & 0. The mean average rating would be 50. However, ratings of 55, 50 & 45 could also result in the same average. The second average might be more trusted because there is more consensus around a particular rating (a lower deviation).
(*In practice, some albums can have several thousand ratings)
This album is rated in the top 3% of all albums on BestEverAlbums.com. This album has a Bayesian average rating of 78.3/100, a mean average of 79.6/100, and a trimmed mean (excluding outliers) of 79.6/100. The standard deviation for this album is 8.9.

I didn't expect it to be that great

why am I crying in the club rn

Sounds like: The sadness which seeps after a night of consuming party drug soup dumplings, yet the memories of the good times persist.
Drink of choice: Spiced yuzu lemonade with a twist

A jubilee is a jamboree with less amor and more uil, which isn’t everyone’s cup of tea, but at least we’ve steeped an album out of it.

I remember when I first heard Everybody Wants To Love You and all going through my head was how I used to hang in studios with so many singer/songwriters who would have loved to create something like that. Felt like she nailed it. That was it. Absolute bullet. Questioned why she wasn’t bigger, why this wasn’t the smash of the summer, track of the year, blasting out of every car whipping down the beach front. Felt like a nugget of gold was tossed into a mall’s wish fountain. An epitome of indie pop fired at us from nowhere and we shrugged it off. We plucked it out of that wish fountain on occasion, but I’m still not quite sure people realized it was an actual gold nugget.

Won’t lie, wasn’t super hot on her follow up record, but at least she gained momentum. Was happy about that. Knew the next release would be make or break time. And then something interesting happened. She was shot out of a canon. That same brain listening to Everybody Wants To Love You for the first time would have never imagined this singer would be topping bestseller lists while also having chart topping hits, but I’m glad Japanese Breakfast squeezed through the crowd. Think she made it with this one.

A warm, glistening, citrus-burst of a record with a summertime fuzz and the sadness which comes along with it, a hug for tears happy or sad. I may be writing to Ms. Breakfast as to why she dedicates the final thirty seconds of her songs to building them, but otherwise, I think this record is everything it wants to be.

Standouts: Posing In Bondage, Kokomo, IN., Sit, Be Sweet

Your feedback for Jubilee