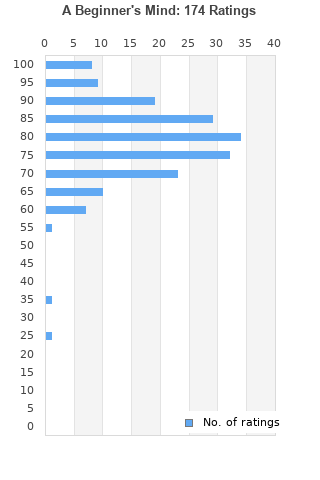 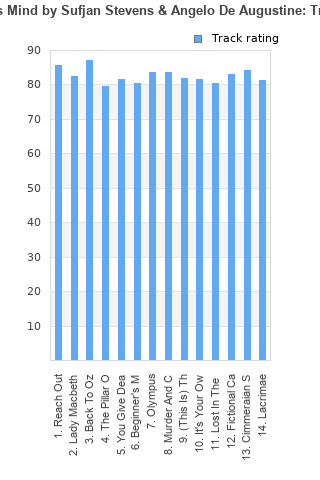 Rating metrics: Outliers can be removed when calculating a mean average to dampen the effects of ratings outside the normal distribution. This figure is provided as the trimmed mean. A high standard deviation can be legitimate, but can sometimes indicate 'gaming' is occurring. Consider a simplified example* of an item receiving ratings of 100, 50, & 0. The mean average rating would be 50. However, ratings of 55, 50 & 45 could also result in the same average. The second average might be more trusted because there is more consensus around a particular rating (a lower deviation).
(*In practice, some albums can have several thousand ratings)
This album is rated in the top 2% of all albums on BestEverAlbums.com. This album has a Bayesian average rating of 78.8/100, a mean average of 78.6/100, and a trimmed mean (excluding outliers) of 79.2/100. The standard deviation for this album is 11.3.

A very unique and interesting idea for an album, that you have to praise for its experimentation. The music itself is also of a very high quality and it is back to being delicate and beautiful like we used to know it to be. There are some real highlights on this record as well such as Back To Oz and Olympus, which are personal favourites. It is also nearly the perfect length with the listener never really getting bored or distracted from the album due to there being a lot to maintain their interest. However, some of the cuts are not great and there is a bit of a problem with repetition as sonically most songs sound quite similar. Overall, a good album with a lot of content to explore but in terms of quality it is definitely behind most of their other work which is a compliment to the calibre of their discography.

A wonderful return to form for Stevens, not his best work but definitely a good one. Augustine brings a nice flair to this work and his songwriting is some of my favorite compared to Stevens, which is no small accomplishment. I wish they had gone bigger and bolder but this is still a heartbreakingly beautiful album.

Excellent album, remind me of carrie & Lowell. The music is beautiful.

This is very good. Unpopular opinion: I like The Ascension way more, but this is a very good comeback to that older style! Anyways, more Sufjan!

(A near-perfect Indie Folk album that is so much more than just an indie folk album that it feels silly dropping that name/genre/tag on it. It’s still peak-Sufjan - somehow after over 20 years and it’s just a life-affirming, beautiful, escapist work of intense beauty)

It’s a good feeling having another Sufjan Stevens work to digest and listen to over and over. Also the harmonies and the input from his musical partner here, De Augustine, are excellent. The two of them have made a spiritual, beautiful in every way, gem of an indie folk album. I love it.

My appreciation grows each time I listen. Sufjan has always been an artist that I considered to be a melodic genius. Specifically in his more low key releases, and more acoustic albums, such as Carrie & Lowell and Seven Swans and big chunks of Michigan, he has always had this brilliant way of creating melodies and harmonies that are unabashedly beautiful. His more epic, huge sounding songs and albums are also brilliant, just not quite as much my personal taste/preference.

The only artist I always thought was Sufjan’s equal in being able to create memorable, familiar, warm and engaging melodies seemingly forever and with ease, was Elliott Smith. And this connection is more clear than ever on this album. Specifically on songs like “Murder And Crime” and “Lost in the World”. The former really does sound like peak Smith, it’s incredibly sad and moving. I also find it fascinating that despite having a somewhat similar style melodically (especially on those more Smith-esque tracks) it’s clear that Elliott and Sufjan are VERY different people and artists. There is not the same abyss-dark sadness on these or any Sufjan song. He is more optimistic and whimsical even at his darkest. Just a thought, and a detour.

On the whole, in sort of bland general terms, this album is great. It’s beautiful, it works as a complete album experience, it’s consistent and it’s a beautiful length as well. If you know me you know I have a bias for shorter and more compact albums generally. While I recognize the genius at work with Illinois, Michigan, Age of Adz etc, each of those classic Sufjan albums just - for me - felt too long. This album is a breezy, beautiful escape. It has its emotional highs and lows and its struggles and it’s loves and it’s fantasy themes and all that…. All in 46 or so minutes. Brilliant.

I don’t know what the distribution of contribution was betwixt Sufjan and Angelo. Otherwise, I would make more mention of Angelo’s work. He has a fine voice and creates beautiful harmonies and if this album is any indication, he can stand up alongside a GIANT in modern music quite well. Which is impressive. I plan on learning more about what this collab actually entailed.

The stand tracks are numerous and again the album as a whole works damn well. I actually feel like the second half is stronger ( despite the first half being absolutely stunning with that opener, “Return to Oz” “Olympus” and the brilliant gem of a title track.). Or l, at least the second half is equal and more to my taste vibe-wise. On side 2 “Murder and Crime” and that run of 4 yea is to end the album are just… *chef’s kiss-mixed-with-a-swoon*

In closing, this album is just about the most bracing breathe of fresh air I can imagine. Right as the beautiful Autumn coolness started setting in, I got this life-affirming album, this deep, musically and lyrically rich album, and I will never forget the feeling of listening to it the first couple times while sitting outside in a breezy 60 degree afternoon. It was magical. And the magic hasn’t gone away after 6-7 listens. I think this is an album I will come back to a lot and move higher and higher in my personal rankings and opinions as I do. It’s maybe, close to, my fave Sufjan Album. This and Carrie & Lowell personally are my faves of his - while having love and respect for most of his other projects (that I’ve heard… he has done ALOT). I just have a soft spot for soft, folkie, harmony-rich, almost S&G-style Sufjan. Anyway, What a beautiful, heavenly album.

Holy fucking shit.... My eyes are dried, my mind is blown. Sufjan's best record in years. Utterly and profoundly beautiful.

Heaven has been opened

Your feedback for A Beginner's Mind