Glow On (studio album) by Turnstile 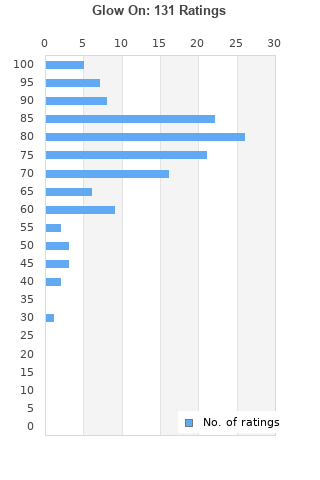 Glow On is ranked as the best album by Turnstile. 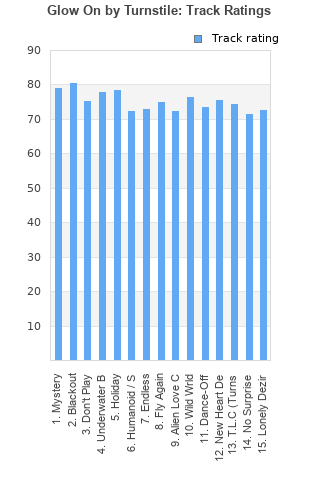 Rating metrics: Outliers can be removed when calculating a mean average to dampen the effects of ratings outside the normal distribution. This figure is provided as the trimmed mean. A high standard deviation can be legitimate, but can sometimes indicate 'gaming' is occurring. Consider a simplified example* of an item receiving ratings of 100, 50, & 0. The mean average rating would be 50. However, ratings of 55, 50 & 45 could also result in the same average. The second average might be more trusted because there is more consensus around a particular rating (a lower deviation).
(*In practice, some albums can have several thousand ratings)
This album is rated in the top 7% of all albums on BestEverAlbums.com. This album has a Bayesian average rating of 76.0/100, a mean average of 76.2/100, and a trimmed mean (excluding outliers) of 76.2/100. The standard deviation for this album is 12.8.

You know, this is impressive. The production and stylistic choices are well-utilized. There are a couple of tracks, especially in the back half, that I can get into, but the songwriting just isn't for me.

I'll preface this by saying I am not a big hard rock fan. I like some punk, but I mainly dabble in alt-rock, indie rock, and some dream pop.

However, I think this album does a great job at blurring the hard rock and dream pop lines. The songs aren't playing just to knock you down nor are they there to just fill you with angst. The album has textures, layers, and some pretty complicated syncopation within its composition. There are dynamic changes and more musicality to this album than any other hard rock/screamo songs I've heard.

The one downside, however, is one that I have somewhat frequently: this doesn't have to be a 15 song album! Most songs are on the shorter side (clocking in between 2:20 and 3:00) so it doesn't plod along too much, but I feel like there are some songs that are more filler. With that said, I really enjoyed the the songwriting, instrumentation, and overall composition of the album.

I’m really digging this album, more than I thought I would. These guys do a bad ass job at tying punk with dream rock and indie. These guys are a serious force, packing some brute force guitars into every second. I also cannot help but to hear some RATM influence.

(Not sure why I am putting in a paranthetical opening statement for this comment considering how short and insubstantial this comment is, boiling down to "Not MY Hardcore! grrrr...". Maybe its just a habit. Anyway, yeah I am not a fan of this uber clean, big, anthemic version of post hardcore and hardcore.)

Personally, I'm not feeling this. I sure hope this ultra modern production isn't influential on Hardcore and post-hardcore for years to come because, man, I hate it/ a lot. The anthemic shouts are cool but to say they lean on them would be an understatement. The riff work is alright, but just the way they sound is rubbing me the wrong way. After the first 2 or 3 tracks I was thinking "Yep, this is gonna be top 100 of year for me at least." Even at that point there were some production choices which I was a bit ish about. But the power of the performances were getting me hyped up. But as the album progressed there was a steady and consistent decline in affinity for the album and the band and the sound. Don't like the Alternative Metal sounds, synth sounds, pop sounds, me no like any of it lol. Okay, that's not true, I liked maybe 1 in 5 production choices. whatever I'm rambling.

I respect that they are "pushing forward the form" and so forth. That is cool and should be commended. But in this case, to my ears, they are pushing it somewhere but I'm not sure its forward. Not backward either. Maybe they are just kinda nudging it sideways or something. (that analogy died fast upon my fingertips.)

EDIT: coming back to say that "Hate" is the wrong word. I don't hate this. I think if this album was playing I would have a good time hearing it. There have been a few albums this year that I "Hated" and this ain't it. However, I guess I just don't like it, and on a scale of hate to love, this would be almost dead center and slightly leaning over into dislike. Okay, that's all.

Easily a top AOTY contender. The entire project is fluid and jam-packed with amazing sounds, vibes, and a less-than-serious stance on hardcore.

Your feedback for Glow On