Happier Than Ever (studio album) by Billie Eilish 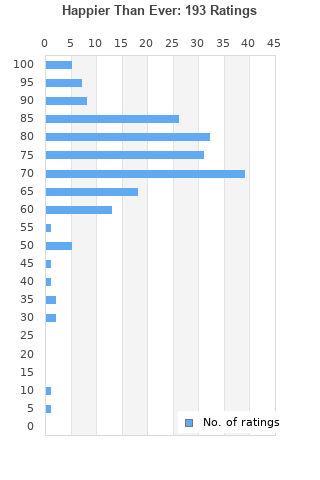 Happier Than Ever is ranked 2nd best out of 4 albums by Billie Eilish on BestEverAlbums.com.

The best album by Billie Eilish is When We All Fall Asleep, Where Do We Go? which is ranked number 875 in the list of all-time albums with a total rank score of 2,118. 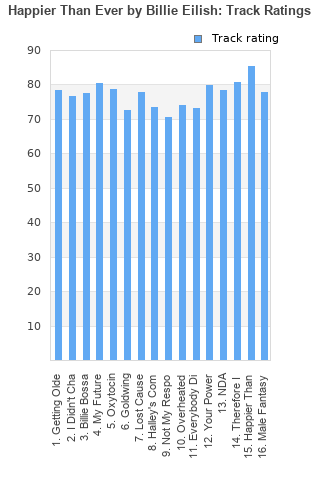 Happier Than Ever
Rating: 86 (74 votes)Comments:

Happier Than Ever rankings

Happier Than Ever collection

Happier Than Ever ratings

Rating metrics: Outliers can be removed when calculating a mean average to dampen the effects of ratings outside the normal distribution. This figure is provided as the trimmed mean. A high standard deviation can be legitimate, but can sometimes indicate 'gaming' is occurring. Consider a simplified example* of an item receiving ratings of 100, 50, & 0. The mean average rating would be 50. However, ratings of 55, 50 & 45 could also result in the same average. The second average might be more trusted because there is more consensus around a particular rating (a lower deviation).
(*In practice, some albums can have several thousand ratings)
This album is rated in the top 24% of all albums on BestEverAlbums.com. This album has a Bayesian average rating of 74.2/100, a mean average of 73.2/100, and a trimmed mean (excluding outliers) of 74.2/100. The standard deviation for this album is 14.7.

Happier Than Ever favourites

Happier Than Ever comments

"Happier Than Ever" is a maturation of Billie Eilish's sound. The writing is much more emotionally vulnerable and nuanced. Much of the record is focused on post break up feelings and reflection, lending a humanity previously not seen in her work. The instrumentals spread into more acoustic and rock influenced sounds. The Achilles heel is that these growths prevent cohesiveness. Musically and lyrically songs of completely aesthetics will be seated next to each other. "Oxytocin" is a driving sensual electronic banger that does not belong between the quiet reflective "My Future" and the almost angelic "Goldwing". This split can also be seen in song quality. "Happier Than Ever" has a fantastic build than explodes with the entrance of it's guitar. Opposite, "Not My Responsibility" feels like an inferior version of Talking Heads Seen And Not Seen". "Happier Than Ever" shows growth but not full success.

This one's more of a grower than her debut. Listening to When We All Fall Asleep... for the first time was mindblowing within the context of mainstream pop music, an excellent intertwining of the O'Connell siblings complementary musical instincts. Refreshing production and songwriting, made even better by the fact that from front to back it was just the two of them. I actually think Happier Than Ever is more mature though. Some of Billie's preoccupations on the debut felt like those of a teenage girl - and of course, she is a teenage girl, so that makes sense. But despite it being solid, it did sound a bit more like a teenager's album, with some cuts that felt a bit trite. This though, is more eclectic, more emotional, perhaps even more authentic. Great record. I think Billie's proved that first album wasn't a fluke.

Her debut was good, but I heard further potential in it. This is the album I was waiting for.

Decent album, preferred the first one. Loved Happier than ever

This album is good, really good in mainstream pop standards, and I know you shouldn’t always compare artists new works to their previous ones but I can’t help but feel that everything that’s lacking here is everything that made WWAFAWDWG so amazing. There’s no cohesive sound here, there’s no strong theme, most of the songs feel thrown in randomly, and some of them just feel half baked. One of the big reasons I loved Billie’s debut so much was how it broke out of the mold most mainstream pop albums adhere to- an album being just a vessel to carry a few radio singles and maybe a song or two made for hardcore fans- it sounded so cohesive. Every song sounded carefully crafted for that album like it was made to be on THAT album. Everything stayed tight to the theme and it told a complex, although at times a little precocious, story. Most of the songs here sound like Billie and Finneas made them, thought they sounded fine, and then threw them on the album for sales sake. Several of the songs sound half finished- Goldwing and in particular sounds like it could be such a lovely song but it sounds like they had a good idea that they just didn’t follow through to completion (Halley’s Comet also gives me this impression although a bit less so). Some of singles here are just kind of drab. Your power has a powerful message but doesn’t have the power to drive it home- it relies on the message itself to carry it. Therefore I Am has a killer beat but with repeat listens just starts to sound like it was made for catchy pop radio. Lost Cause has potential but doesn’t even make an attempt to grab or hold any attention and is easily forgettable. With all that being said it does have some very notable moments- My Future, Happier then Ever, and Male Fantasy are some of the best tracks in Billies discography. Overheated, Everybody Dies, Oxytocin and I Didn’t Change my Number are good but feel like they just need a little more studio time to make truly great. Billie Bossa Nova is a solid track but doesn’t really leave a long lasting impression like even the B-tier songs on When We All Fall Asleep do. NDA seemed super drab on first listen but has grown on me over time but still needs a little something more. In short this album needs two major things- a strong theme to tie it all together and a heavy polishing, maybe even a few songs cut out of the album altogether. It has incredible potential but fell depressingly short. Those last two tracks end the album with a bang though. 7/10

The recent fan spat gives this album I guess it's own (accidental) new, interesting context...

It's solid, I like that HTE moves away from the somewhat more labored and occasionally goofy posturing of her previous album for one that has a bit firmer grasp on what it's about, even if it's themes are ultimately a bit over-hammered in the end. From a pure compositional and songwriting standpoint, Billy and Finneas are still very much the sum of their influences. However, I think for the most part they know how to work these somewhat deja-vu-ish rhythms into Billie's own larger-than-life persona as a performer, which overall feels more textured and less flatly "projectionable" than it's been previously. It's telling that even songs that are not, well, good necessarily are still kind of fascinating, particularly the marrying of electro-nu-industrial and sugary meta-pop of Oxycotin. While thematically it's fairly consistient, in terms of craft and particuarally in the track sequencing it's a bit unevenly slanted and makes some odd choices (particularly throwing in When We All Fall Asleep leftover tracks near the end rather than the beginning) and still feels a bit too sanded-over in it's production in most places- especially the songs that seem to really want to sink some venom into their targets come across as rather dry and limp. Overall it's at it's strongest when she's digging into her own complicated internal feelings, as along with the failed kiss-off moments the attempts at larger commentaries on fame or personal hate feels both far too blunt as well as performative that they're more preening than provocative.

So it's an improvement, it feels messier and yet more assured than her previous record even if it's not particularly, well, enjoyable to listen to and (whether or not this was the outright intention) feels aimed at a tigther, more stodgier audience- looking more for accolades and did-you-get-the-message assurance than a more personal musical connection with any random listener- and still only momentarily brilliant. However, after shrugging off her music previously, I am interested in where she and her brother go next, even if it feels like in just short of time there's been more than enough Billie attention to go around for one lifetime. Guess just have to adjust to the new age.

It might not be as epic as her debut but it's really close, especially after multiple listens. Love how NDA goes right into Therefore I Am. Was worried at first how much I'd like this since her debut was my favorite album of 2019 and the singles on that first one just slapped harder but dang some of Happier Than Evers best moments were the non singles like I Didn't Change My Number, Oxytocin, Halley's Comet and Overheated.

An improvement over her debut--an album I liked! Here, Billie Eilish continues to exude personality and curiosity. Even if it's not a grand evolution, Happier Than Ever a tighter, bolder, better-written album. It's when Eilish is marries the more intimate stories and moments with Finneas's undeniable production--particularly the more kinetic, poppier tracks--that this thing really comes alive.

Some of her ventures into bigger, more philosophical topics aren't always my thing, but I can't hate the pursuit of deconstructing of various social ills and our mortality. Billie Eilish continues to be one of our premier mainstream talents. For her, the only way is up.

Your feedback for Happier Than Ever