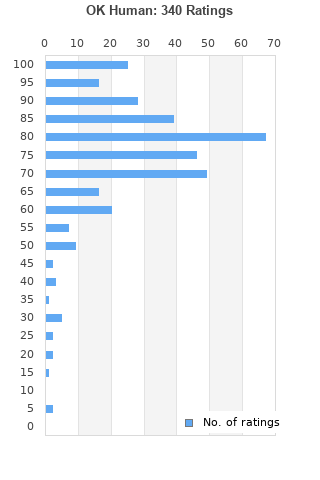 OK Human is ranked 6th best out of 24 albums by Weezer on BestEverAlbums.com.

The best album by Weezer is Weezer (The Blue Album) which is ranked number 74 in the list of all-time albums with a total rank score of 19,311. 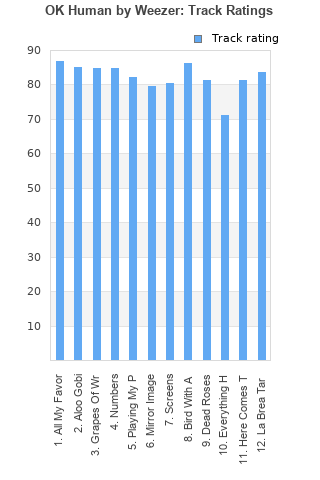 Rating metrics: Outliers can be removed when calculating a mean average to dampen the effects of ratings outside the normal distribution. This figure is provided as the trimmed mean. A high standard deviation can be legitimate, but can sometimes indicate 'gaming' is occurring. Consider a simplified example* of an item receiving ratings of 100, 50, & 0. The mean average rating would be 50. However, ratings of 55, 50 & 45 could also result in the same average. The second average might be more trusted because there is more consensus around a particular rating (a lower deviation).
(*In practice, some albums can have several thousand ratings)
This album is rated in the top 4% of all albums on BestEverAlbums.com. This album has a Bayesian average rating of 77.1/100, a mean average of 75.9/100, and a trimmed mean (excluding outliers) of 77.3/100. The standard deviation for this album is 16.8.

How does it sound sad and happy at the same time?

An excellent record, sounds exactly like Weezer should sound like at this point in their career: witty, charming and slightly twee. It's interesting that both Springsteen and Cuomo have been influenced by Hary Nilsson as of late.

Track Pick: All My Friends

This album has absolutely stunned me. I was expecting more of the same of recent time Weezer but was instead greeted by this masterpiece. The lush pop arrangements are astounding and create a sense of nostalgia whilst still feeling new and fresh. The instrumentation is amazing, especially the orchestra which makes every song feel so grand and important. The string arrangements on this album are near perfection. The whole album also feels so cohesive with every song blending into the next and engulfing you in the music. The only criticism is a few songs are just good and not great and also it is a bit short as I didn't want it to end. Overall, this album is brilliant and as time passes people will start to see that a bit better.

A weird listen. I think it's right on the edge of good, but there's a lot of really rough, cheesey, lyrics, and a few songs that really scream "please put us on your car/Target commercial". At the same time though, props for being musically way better than most recent Weezer. This feels like the Pet Sounds of Imagine Dragons/X Ambassadors/American Authors-tier music, and I really don't know where that leaves it.

Don't see anything special about this release other than a band that typically doesn't use an orchestra, did. I'm not a Weezer fan so I don't fully appreciate the change in style but either way I don't really care for any of the songs. Maybe I'm missing something but I don't get much more than catchiness from this album.

One of my absolute favorites so far this year.

Your feedback for OK Human