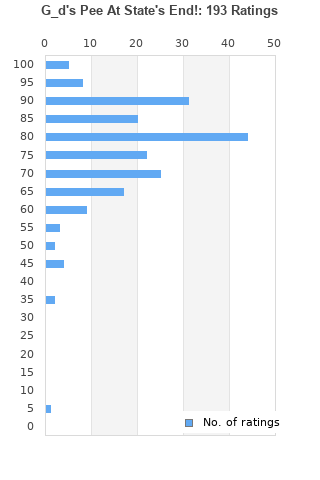 Godspeed You! Black Emperor G_d’s Pee AT STATE’S END! LP+10" (2ND APR) PRESALE
Condition: New
Time left: 3d 2h 8m 54s
Ships to: Worldwide
£24.99
Go to store
Product prices and availability are accurate as of the date indicated and are subject to change. Any price and availability information displayed on the linked website at the time of purchase will apply to the purchase of this product.  See full search results on eBay

G_d's Pee At States End! is ranked 8th best out of 8 albums by Godspeed You! Black Emperor on BestEverAlbums.com.

The best album by Godspeed You! Black Emperor is Lift Yr. Skinny Fists Like Antennas To Heaven which is ranked number 85 in the list of all-time albums with a total rank score of 18,728.

Listen to G_d's Pee At States End! on YouTube 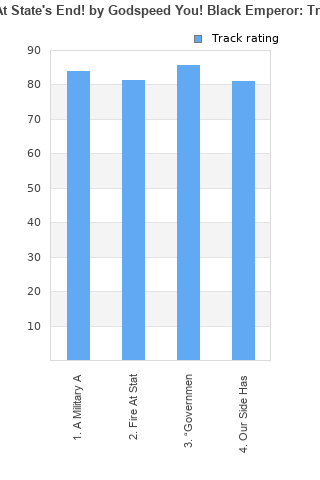 Rating metrics: Outliers can be removed when calculating a mean average to dampen the effects of ratings outside the normal distribution. This figure is provided as the trimmed mean. A high standard deviation can be legitimate, but can sometimes indicate 'gaming' is occurring. Consider a simplified example* of an item receiving ratings of 100, 50, & 0. The mean average rating would be 50. However, ratings of 55, 50 & 45 could also result in the same average. The second average might be more trusted because there is more consensus around a particular rating (a lower deviation).
(*In practice, some albums can have several thousand ratings)
This album is rated in the top 1% of all albums on BestEverAlbums.com. This album has a Bayesian average rating of 81.2/100, a mean average of 81.8/100, and a trimmed mean (excluding outliers) of 82.3/100. The standard deviation for this album is 10.5.

sorry in advance for the following:


(Basically, I liked it. Everyone or nearly everyone reading this knows who this band is and what Post rock is and that this band and that genre are linked inextricably. It's a solid album. Leave now unless you want to read my unending comment which starts in 3... 2... )

1... ---------I don't know how I feel about this album. Not exactly. Same goes for this iconic band. And, as this band's work encompasses all existence and transcends life and is up in the ether hobnobbing with Infinity itself per their most ardent fans, I suppose this means I don't know what to think of life, the universe, or anything. Which, come to think of it, is true.

But, to elaborate, I don't know where my thoughts fall yet after 2 listens to this album about urine of god ending states. As with all GY!BE albums, this is a detailed and many-layered beast, grasping for questions and answers rarely asked or sought in rock music. All this without saying a thing. On first listen I was transfixed and transported and when the album ended I said "well, shit" and wondered if this was going to be my end-of-year number 1 album. On second listen my subjective response was a bit muted. Although, certain crescendos (they sure do love their crescendos and builds... don't worry this won't be yet another annoying nerdy asshat rant about "Crescendocore" and "oh, oh, this has been done, like, a million times, gosh!" or "wtf can't anyone hear that this is not gooood? it's nothing compared to Tortoise." blah blah blah. Don't worry, I can't stand those people as much as you can't stand them. ) and moments are just as mindboggling on second and now third listen as they were in my first. The things that maybe I was less engaged with were the shorter and less "buildy" songs, or, rather, parts or pieces. Although without exception each one of these tracks/parts, short and long, are rich and well-conceived, some of the hors d'oevre tracks left me less than blown away. I suspect this is an opinion that will change or at least develop with repeat listens and perhaps I'll start mentally stitching this newest Godspeed conception together. For now though some of the sounds at the beginning of the 2 main 20 minute pieces didn't engage me a whole lot.

But see, as I write this I am listening a third time, and you know what? I'm already starting to feel my opinions shift mercurially as I type. Damn you, Godspeed! Now I'm wondering again if this is AOTY contender. And this vacillation is making for a REALLY shitty comment. (Future self, 1 hour after typing last sentence, I end up yet again in between Really solid and AOTY, as of now, after 4 listens, its like top 10 album of year, okay lets continue and see what other crazy shit this wild ginger says...)

Let me talk through a couple of these tracks here and see if that helps clarify my opinions... Okay, starting with the end, "OUR SIDE HAS TO WIN (for D.H.)" is a pitch perfect, tear-inducing, muddy, noisy, serene and haunting ambient piece and a perfect closer to the album. The last minute of this thing made me feel like Frodo rolling out of Rivendell with the boys.

Now going back toward the beginning, I thought the opening bit with the word Military in the name, wasn't particularly special even 4 listens in, but finally 20% into "Job's Lament" shit starts getting tense and maybe i'm just too simple for this post rock stuff, but I get most hyped about those HEAVY bass notes and that staticy guitar as it builds up to the muscular close of that track. This leads into the first "Holy Shit...is you angels?" moment of the album for me, when the guitar comes searing in with the faint sound of voices melded in, that is a nice moment. Brilliant, really. Only lasts for a couple minutes, then some cool down from that high and then some gunshot noises annnnndddd close first big suite. The in-between track that follows and is jammed betwixt the 2 MEGA post rock suites "Fire At Static Valley" is quite nice. Its not the same level as the closer, but quite gorgeous.

Okay, and then as for the second big suite, I probably won't go into detail what I thought of each piece within like I did with the first, but I can say that almost everything about "GOVERNMENT CAME pretentious coordinates or something" is dope. Almost all 11 minutes of it was candy to me ears. The first 5 minutes are build up and pretty good build up as it has that dark power that is what I loved about F#A# Infinity, but its all foreplay to the moment when the soaring guitars, well, when the guitars soar. lol. Then they do that post rock thing where it gets intense and then more intense and then more and at some point you notice you're not breathing, you're eyes are squinting unflatteringly, and you're mumbled "Stop, No, I can't take it!" turns into euphoric shouts of "No, don't stop! don't STOOOOPPPP!!!!". Its orgasmic is what I'm saying. And just like orgasms, despite being played out and ever so familiar, they're quite good. From there there is more slow noodling as if they're getting themselves ready for another go-round, followed by another (less impactful, yet still gorgeous) epic crescendo. And then BOOM! We are back to where we started, which was the end, and that final god-tier ambient closing track.

The name is silly, but Idk maybe I am just basic. Seems pretty weird. The cover is, on first glance, underwhelming - BUT, I like it now that i look at it. has a certain circular, symbolic meaning. Said symbolism and cover maybe influenced my hackneyed attempt at such a round-about structure to this comment and track break down.

And as far as how this fits/ranks in their discog, well I'm far from a mega fan of this band. I like/love their 1997 album because it has the word blues in one of its songs and that is an instant winner in my books. I love their 2000 album, but of course I'm contractually obligated to say that on this site and on this internet. But in all seriousness I haven't listened to Lift Yr Skinny Fists in years, but there was a time when I was in love and thought I'd discovered the holy grail of music when i heard that. Never heard Yanqui I don't think, and I really like their legendary 1999 EP although I've only heard it once and can't say what I liked about it. When I first joined this site in 2012, I was caught up along with almost every other BEA member in the recent release of Allelujah... Don't Bend Ascend. As a matter of fact, I believe that was the VERY FIRST album comment I ever made on this site. I loved it and still do tbh. I adore how fucking brutally heavy that album is. Haven't heard their 2015 or 2017 offerings. All that is to say I don't really feel I have any strong context or freshness to any relative quality assessments. I will say that I really really liked this album. It hit me at the right time and I am very glad its in my life. I am still not someone who will get excited about Post Rock when placed as a genre on an album, as a matter of fact I kinda avoid such albums. Not sure why. Maybe I like music that is more immediate and less drawn-out than what that genre tag evokes.

Anyway, this will end up being the most unstructured (aka least structured) of all my 2021 chart/album comments and my longest and my most deserving of ridicule and the one with the most bad English (which is saying something). I will close by saying, "cool album". The highs are heaven, the lows sound like somewhat by-the-numbers GY!BE things analogous to a nice serene Nebraska cornfield.

Oh and one final added comment, regarding the general darkness or vibe of this album, I felt like it was the least dour, apocalyptic of the albums I've heard by them. All their albums have some moments of soaring beauty, but I felt this had several that felt almost religious and not in a end-of-days type of way either. Anyway, I have seen comments saying this has a a deeply dark atmosphere, and maybe that is just a personal reaction thing, but I personally found it refreshing how GY!BE sounded a little less morbid this time around.

Gods Pee haha I get it. Quite a strange title for this band. I feel like secretly maybe it's brilliant or just an inside joke. Either way this album is really good. Slightly haunting and definitely beautiful.

@LebowskiRams (joke originally was made by him/her)

Your feedback for G_d's Pee At States End!