Hey What (studio album) by Low 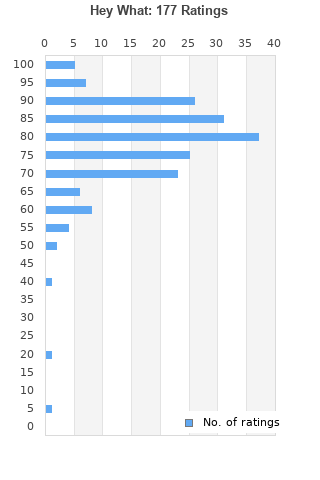 Hey What is ranked 4th best out of 20 albums by Low on BestEverAlbums.com.

The best album by Low is I Could Live In Hope which is ranked number 1003 in the list of all-time albums with a total rank score of 1,842. 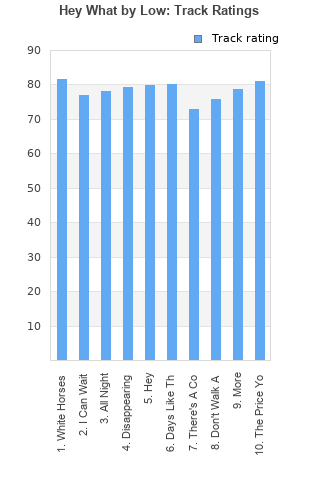 Rating metrics: Outliers can be removed when calculating a mean average to dampen the effects of ratings outside the normal distribution. This figure is provided as the trimmed mean. A high standard deviation can be legitimate, but can sometimes indicate 'gaming' is occurring. Consider a simplified example* of an item receiving ratings of 100, 50, & 0. The mean average rating would be 50. However, ratings of 55, 50 & 45 could also result in the same average. The second average might be more trusted because there is more consensus around a particular rating (a lower deviation).
(*In practice, some albums can have several thousand ratings)
This album is rated in the top 2% of all albums on BestEverAlbums.com. This album has a Bayesian average rating of 79.2/100, a mean average of 79.2/100, and a trimmed mean (excluding outliers) of 79.6/100. The standard deviation for this album is 11.6.

Ive been a fan of theses guys (duo) for awhile now and 27 years since they first began, post millennium Low continue to deliver albums of significance such as ‘HEY WHAT’ (capitals)

Put simply there is no other artist who can do distortion and feedback like they can, its both cathartic and beautiful in equal measures

This album is wonderful. Easily my favorite Low project so far. Makes me want to go back and listen to their other albums, many of which I didn't particularly enjoy on first listen.

Listening to this album I hear the soundtrack of the consequences of climate change.

(Total masterpiece. Genres to describe this I guess would be post-industrial, Noise, with some kind of gospel spirituality mixed in. Anyway, that doesn’t really describe this album. Not very well, anyway.)

What can I possibly say that will do this album justice? I don’t think I am capable. This album is special. When I listen to HEY WHAT, it is an out-of-body experience. The detail contained within the “noise”, the way the sheer volume of the album rolls over me like waves, I feel like I am thrown into a storm in the middle of the ocean, and for a few seconds I fight it and I panic and I start to scream and cry. But then a voice reassures me that these tidal waves won’t cause me harm – not truly and not truly me -, and I am told to breathe and embrace the immensity of this place and this experience. I relax and I breathe and … I am fine, I am calm, I am free. The rest of the album is like a massive, Pacific-sized epic about modern life and spirituality. And unlike so many other unapologetically gloomy, bitter, and hopeless epics that seem to tackle this struggle, with HEY WHAT I feel love and I feel hope and I glimpse a way through this mess I find myself in.

Musically, production-wise, this album makes me laugh lovingly and in awe, because I just can’t understand how humans being of flesh and blood can go and create this. Like, how? This could be called “Noisy” and “Staticy” and “Loud” but I can’t really say that those words fit to describe even the most inhuman and loud and most intense moments in this album. These scratchy, buzzing, sonically overwhelming sounds never sound harsh or hard to listen to. Again, like I said at the beginning, I have no clue how to express what this sounds like to me. The machines present on this album are simply communicating, meshing, corresponding with the human voices and harmonies. When the harmonies and the machine sounds come together, in these artist’s genius hands, what you get is transcendent music of the highest caliber.

Just yesterday I was trading comments with the excellent fellow-BEA user buzzdainer. Buzzdainer mentioned about Chris Stapleton’s 2020 album Starting Over: “…for me it's the quintessential album for coping with the cruel realities of our current decade.” This description was excellent and I can see how Starting Over would have that effect. However, when I took a look and thought about what album for ME truly had such a significance in this current decade… I couldn’t think of one. The music I have loved from this decade thus far has been mostly powerful and cathartic in very different ways or, in some cases, very escapist. But no album as of yesterday had I heard that really uplifted me and helped me cope and find meaning and stabilized me in this current crazy world we live in.

Then just a couple hours later I pushed play on Low’s latest. By the time I finished listening the very first time I felt emotionally satiated, understood, fulfilled. And I felt spiritually uplifted and enlightened. This is probably the most uplifting piece of music I have heard this decade so far. It for sure is.

To list the specific tracks on here that I love or want to shout out seems like a silly activity. It is only silly for me because the whole album, start to finish, is the perfect example of a cohesive album experience. For example, I can point out (and – lol - I am about to) that the back-to-back majesty of the track “Hey” followed by “Days Like These” makes me legitimately weep with joy and some emotional mixing I still don’t understand. And that is true, I think Hey/Days Like These is some of the greatest music I have ever heard full stop. BUT I had heard “Days Like These” as a single and when I heard it in that out-of-context way, I thought it was a pretty song and it made me excited for the new album… and that is all I thought of it. But when I hear it now on the heals of “Hey” and also after the absolutely stunning build up to this middle portion of the album, it is cathartic, life-changing, inspiring and perfect. Every song here is special on its own but transcendent as part of the entire sweep of the album.

This album expresses to me; Humanity, Human Goodness, True Affection and Love and Unity winning and triumphing in the face of inhumanity, materialism, and the bleak ubiquity of the utterly unfeeling. This album is a treasure. I actually feel a deep appreciation and an immeasurable respect for and to Mimi Parker and Alan Sparhawk and BJ Burton for creating this album. It’s just what I needed to hear in days like these.

Now I know I have not really said much of anything in this “review”/rambling comment – I haven’t touched much upon the songs and the lyrics and the harmonies and the industrial manipulations and genres and all that. Well, sorry. But this album, more than any other this year (outside of perhaps By the Time I Get To Phoenix), really transcends words and clear description.

A definite companion piece to Double negative which continues the sonic template of it's predecessor. It is really all about the sound rather than the songs and sometimes it does feel like the 'noise' on the record is there to hide the fact that the songs aren't that amazing on their own. Still, the noise is there and it does suit the songs overall. If you liked Double negative you'll like this and if you didn't like it then....

Beautiful. This album and their last one is some of their very best work. They aged like fine wine like the saying goes haha. It's impressive and rare when a bands later work is their best.

Your feedback for Hey What