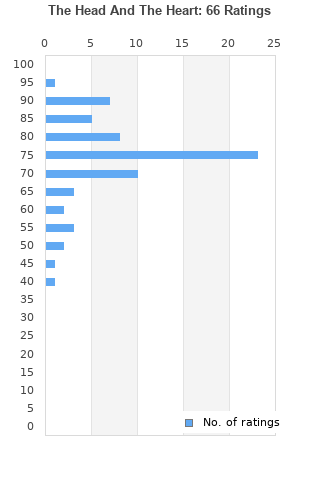 Head And The Heart | Single-CD | Shake (Promo, 1 track, 2013)
Condition: Good
Time left: 6h 25m
Ships to: Worldwide
£4.48
Go to store
Product prices and availability are accurate as of the date indicated and are subject to change. Any price and availability information displayed on the linked website at the time of purchase will apply to the purchase of this product.  See full search results on eBay

The Head And The Heart bestography

Listen to The Head And The Heart on YouTube 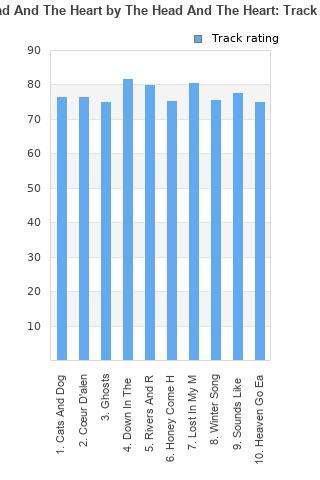 The Head And The Heart rankings

The Head And The Heart collection

The Head And The Heart ratings

Rating metrics: Outliers can be removed when calculating a mean average to dampen the effects of ratings outside the normal distribution. This figure is provided as the trimmed mean. A high standard deviation can be legitimate, but can sometimes indicate 'gaming' is occurring. Consider a simplified example* of an item receiving ratings of 100, 50, & 0. The mean average rating would be 50. However, ratings of 55, 50 & 45 could also result in the same average. The second average might be more trusted because there is more consensus around a particular rating (a lower deviation).
(*In practice, some albums can have several thousand ratings)
This album has a Bayesian average rating of 73.7/100, a mean average of 73.8/100, and a trimmed mean (excluding outliers) of 73.8/100. The standard deviation for this album is 11.7.

The Head And The Heart favourites

The Head And The Heart comments

Just because it's been done before doesn't mean it's bad. Creating melody and harmony will always be interesting, without being "in the front" of developing music. This album has many excellent songs, and some repeatable that you can be without.

The War on Drugs can still live on repeating one song on 3 albums (I like them) but getting away with it. And my least favoured band, the Beatles.... I think they sound the same over at least 15 records (But they dont) because I can't stand their voices.

Nothing particularly new or very interesting, just good tunes throughout.

Check out the first 5 tracks, Lost In My Mind and Sounds Like Hallelujah

I know I'm probably a minority when it comes to this... but... here goes... I can't stand this album. It's the same indie, folky stuff that we've heard from other artists, minus all the creativity and life that makes a lot of those acts interesting. This is unfortunate, as the musicians appear to have skill. This album is just... bad, but not unlistenably so. It's just immensely boring.

Your feedback for The Head And The Heart