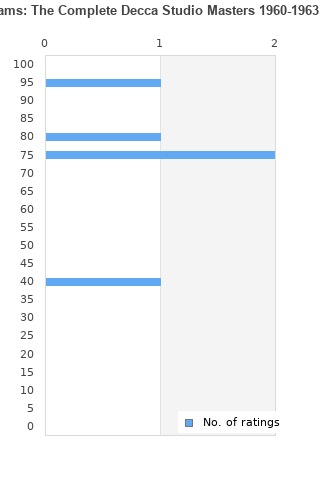 Sweet Dreams: The Complete Decca Studio Masters 1960-1963 is ranked 5th best out of 18 albums by Patsy Cline on BestEverAlbums.com.

The best album by Patsy Cline is Showcase which is ranked number 3457 in the list of all-time albums with a total rank score of 425. 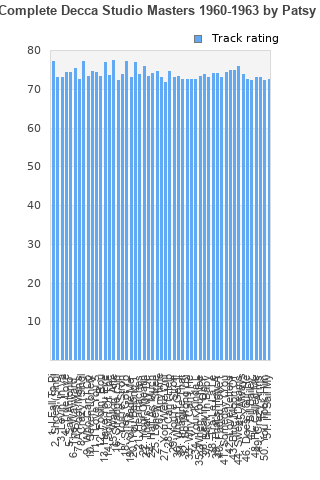 This 2 CD release includes everything Patsy Cline recorded and released on Decca Records during 1960-64. Some of the songs were first released on compilations in the years immediately after her tragic death in March 5, 1963, but all known Decca recordings are included here. There are probably outtakes and alternate recordings stored in the archives, but that is an entirely different matter.

For me the Cline recordings after her shift from 4-Star Records to Decca are genuinely interesting stuff, so this release contains everything that I find essential. Some 4-Star Records recordings may be solid enough, but they are mostly traditional country and do not have the charisma of her later recordings.

Along with Owen Bradley Cline broke out of the narrow country frameworks and recorded songs in several genres. Moreover, more versatile co-ordinated arrangements and contemporary songwriters were brought in.

Only two Decca albums were released during Cline's lifetime: "Showcase" and "Sentimentally Yours." Both albums are classics without any really weak numbers. Many of her best known songs come from these two albums.

On these albums were gems like "When I Get Thru With You," "That's How a Heartache Begin," "Love Letters in the Sand," "Leaving on Your Mind," "You're Stronger Than Me" and "When You Need a Laugh. "

It can be difficult to define exactly what makes Patsy Cline so special, you can feel just that the songs go straight into the heart of you.

"Inkpot" from 1972 was the fourth album from Shocking Blues with Mariska Veres as a leadsinger. It was also the fourth album released in three years, and you may suspect that songwriter and guitarist Robbie van Leeuwen has been under heavy pressure to continually come up with new songs to the group's records; perhaps this is why the group chose to record three cover songs. At any rate "Inkpot" appears less homogenous than the previous albums.

This does not mean that the album can be called weak; with strong Van Leeuwen originals like "Navajo Tears", "Inkpot" and partly also "Hey", it is an album not to be ignored.

It is worth noting that "Inkpot" was originally released in two different versions. One version replaces the somewhat pale "Blue Jeans", "Tobacco Road", "Who Save My Soul," "Red Leaves" and "I Melt Like Butter", with significantly stronger singletracks like "Out of Sight Out of Mind" "I Like You", "Blossom Lady", "Give My Love To The Sunrise" and "Is This a Dream". This alternate version obviously comes out far more attractive than the original Dutch version. The four stars are for the version with the singles.

As with the previous albums the musical side is top-class. It is a pleasure to listen to Van Leeuwen's varied and effective guitar playing - and Veres, of course, is as always an indispensable focal point.

Your feedback for Sweet Dreams: The Complete Decca Studio Masters 1960-1963