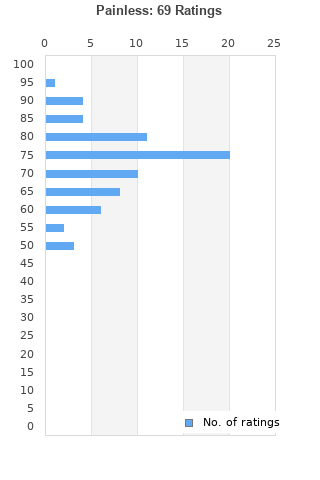 Painless is ranked 2nd best out of 3 albums by Nilüfer Yanya on BestEverAlbums.com.

The best album by Nilüfer Yanya is Miss Universe which is ranked number 7033 in the list of all-time albums with a total rank score of 177.

An Evening with Bruce Hornsby
The Wilbur, Boston, United States. 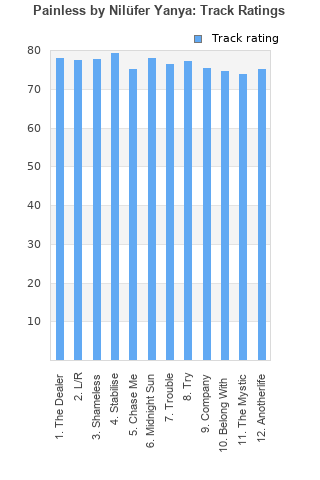 Rating metrics: Outliers can be removed when calculating a mean average to dampen the effects of ratings outside the normal distribution. This figure is provided as the trimmed mean. A high standard deviation can be legitimate, but can sometimes indicate 'gaming' is occurring. Consider a simplified example* of an item receiving ratings of 100, 50, & 0. The mean average rating would be 50. However, ratings of 55, 50 & 45 could also result in the same average. The second average might be more trusted because there is more consensus around a particular rating (a lower deviation).
(*In practice, some albums can have several thousand ratings)
This album has a Bayesian average rating of 73.3/100, a mean average of 73.3/100, and a trimmed mean (excluding outliers) of 73.3/100. The standard deviation for this album is 9.6.

'PAINLESS' is spare and brooding, with crunching electronic drums and fizzing alkali guitar and synths. I enjoyed myself overall, as I thought Yanya's writing had a harsh beauty to it, Wilma Archer's exec production was very consistent and I have a soft spot for the flourishes Bullion added to the sonic palette. Overall however, I have to agree with Arthurknight that it's really very good but perhaps doesn't surpass that.

Nilufer Yanya are consistently good, but I can never get SUPER into it. Their best stuff on this album (imo), just like in their previous releases, are the songs that sound like In Rainbows covers, like "midnight sun" here – they're good covers though.

Your feedback for Painless