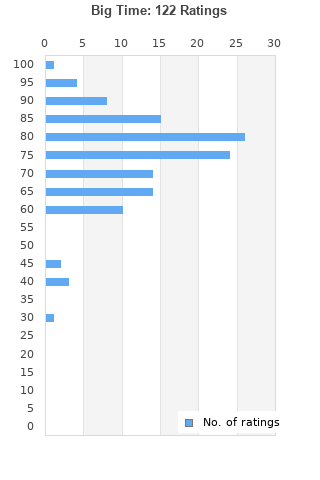 Big Time is ranked 5th best out of 11 albums by Angel Olsen on BestEverAlbums.com.

The best album by Angel Olsen is My Woman which is ranked number 779 in the list of all-time albums with a total rank score of 2,359. 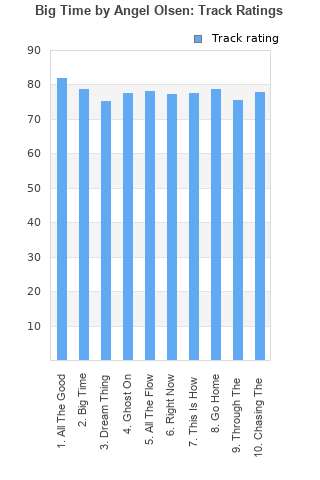 Rating metrics: Outliers can be removed when calculating a mean average to dampen the effects of ratings outside the normal distribution. This figure is provided as the trimmed mean. A high standard deviation can be legitimate, but can sometimes indicate 'gaming' is occurring. Consider a simplified example* of an item receiving ratings of 100, 50, & 0. The mean average rating would be 50. However, ratings of 55, 50 & 45 could also result in the same average. The second average might be more trusted because there is more consensus around a particular rating (a lower deviation).
(*In practice, some albums can have several thousand ratings)
This album is rated in the top 24% of all albums on BestEverAlbums.com. This album has a Bayesian average rating of 74.3/100, a mean average of 74.5/100, and a trimmed mean (excluding outliers) of 74.5/100. The standard deviation for this album is 11.5.

This is a perfectly okay album, but Olsen has lost any x-factor I thought she once had. I'd rather listen to 70s country classics than this project – because that's literally what this album is emulating, just with gay themes and ill-fittingly clean production. Olsen is able to make the genre shift work, only the end-product isn't especially impressive; it's a facile project in that nothing new to the genre is offered expect for the fact Angel Olsen is doing it. Go Home is an oasis in the tracklisting where the sound is very signature Angel Olsen but with just a twist of country – this should have been pursued more and on more fleshed out songs. Lastly, mixing is too quiet here, and we really miss out on some much needed crescendo moments.

A slow and gentle record of songs about grief, love and healing that delves more into a Nashville country sound than any of Olsen's previous efforts.

Solid, but wears thin after awhile

Your feedback for Big Time