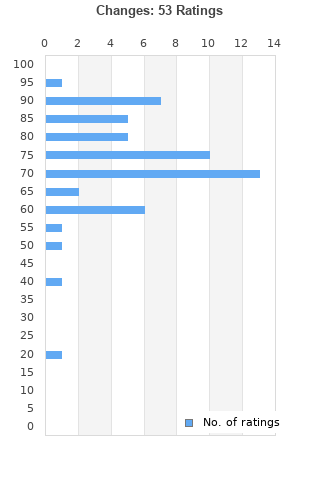 Changes is ranked 18th best out of 30 albums by King Gizzard & The Lizard Wizard on BestEverAlbums.com. 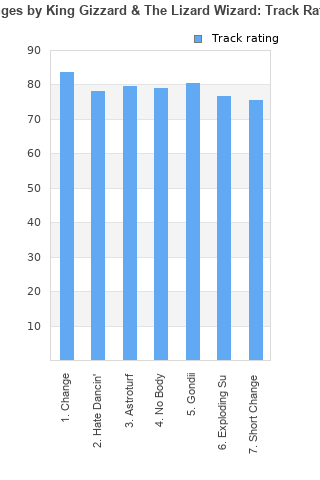 Rating metrics: Outliers can be removed when calculating a mean average to dampen the effects of ratings outside the normal distribution. This figure is provided as the trimmed mean. A high standard deviation can be legitimate, but can sometimes indicate 'gaming' is occurring. Consider a simplified example* of an item receiving ratings of 100, 50, & 0. The mean average rating would be 50. However, ratings of 55, 50 & 45 could also result in the same average. The second average might be more trusted because there is more consensus around a particular rating (a lower deviation).
(*In practice, some albums can have several thousand ratings)
This album has a Bayesian average rating of 73.1/100, a mean average of 72.0/100, and a trimmed mean (excluding outliers) of 73.2/100. The standard deviation for this album is 14.4.

This one is resonating so much more than any of their releases this year (all solid, though). It's still new, so can't put my finger on it, just can't stop playing this one over and over. Loving it

Though much more musically challenging than any of the other KGLW releases so far this year (or even just this MONTH), Changes still manages to hit its hardest with its more traditional shorter, groovier numbers like "Hate Dancin'", "Astroturf", and "Gondii". I've seen this album be referred to as KGLW's unique rendering of "Giant Steps", which seems like surface-level absurdity...but maybe not. What do I know?

One thing is for sure: They sure don't give a fuck what we all think. If people hate it, they're just going to put out another one. I'm not complaining.

Your feedback for Changes