Surfing With The Alien (studio album) by Joe Satriani 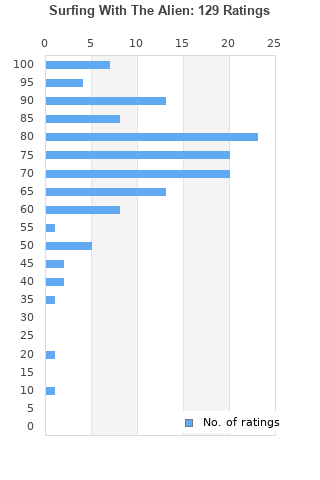 Surfing With The Alien is ranked as the best album by Joe Satriani. 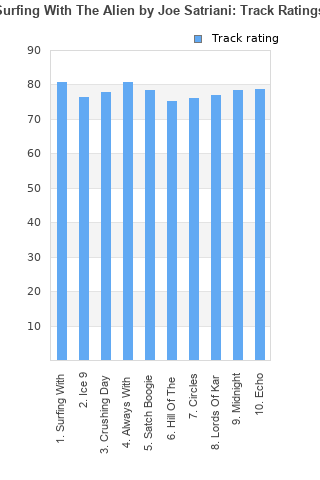 Surfing With The Alien rankings

Surfing With The Alien collection

Surfing With The Alien ratings

Rating metrics: Outliers can be removed when calculating a mean average to dampen the effects of ratings outside the normal distribution. This figure is provided as the trimmed mean. A high standard deviation can be legitimate, but can sometimes indicate 'gaming' is occurring. Consider a simplified example* of an item receiving ratings of 100, 50, & 0. The mean average rating would be 50. However, ratings of 55, 50 & 45 could also result in the same average. The second average might be more trusted because there is more consensus around a particular rating (a lower deviation).
(*In practice, some albums can have several thousand ratings)
This album is rated in the top 17% of all albums on BestEverAlbums.com. This album has a Bayesian average rating of 74.7/100, a mean average of 73.9/100, and a trimmed mean (excluding outliers) of 74.8/100. The standard deviation for this album is 15.8.

Surfing With The Alien favourites

Surfing With The Alien comments

Not just a walking shredder, but also a solid composer capable of creating meaningful melody. This album sits atop the more one dimensional examples of the shred generation.

To me this is brilliant but i love to listen to extended guitar solos and jamming. Satriani has an amazing command of the guitar he always sounds so in control like a jedi master with his craft. Special album from a special player. Possibly the greatest technical guitar player ever.

Obviously lacks songwriting. A one off song is probably tolerable of someone wanking on the guitar like this, but a whole album is torture.

My brother in-law was a Joe Satch fan-boy. He loved all the 'guitar gods' (Steve Vai, Jeff Beck, Eric Johnson, Steve Lukather). He tried so hard to get me to appreciate this album. Don't get me wrong - amazing technical skill. But I don't see the emotion, the storytelling, the atmosphere. I just hear doodling. Some might call it wanking.

Was there a lawsuit with the album cover? I'll be listening to this album soon.

Oh yea! Satriani baby! Such a diverse player. Doesn't get as much credit as he deserves. At least not from the shred/virtuoso fanboys.

Your feedback for Surfing With The Alien