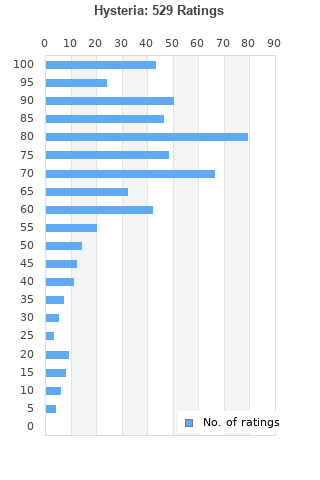 Hysteria is ranked as the best album by Def Leppard. 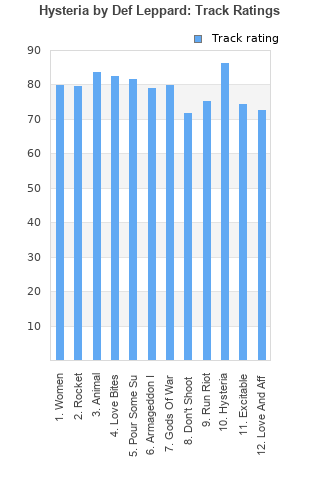 Rating metrics: Outliers can be removed when calculating a mean average to dampen the effects of ratings outside the normal distribution. This figure is provided as the trimmed mean. A high standard deviation can be legitimate, but can sometimes indicate 'gaming' is occurring. Consider a simplified example* of an item receiving ratings of 100, 50, & 0. The mean average rating would be 50. However, ratings of 55, 50 & 45 could also result in the same average. The second average might be more trusted because there is more consensus around a particular rating (a lower deviation).
(*In practice, some albums can have several thousand ratings)
This album has a Bayesian average rating of 72.0/100, a mean average of 71.4/100, and a trimmed mean (excluding outliers) of 72.0/100. The standard deviation for this album is 21.4.

This is not a bad album, but by modern standards, this is not a heavy metal album. This is more like Heart, Europe, or REO in the heaviness. That is not a problem, but many of the songs are pretty much carbon copies of each other sonically and rhythmically. Especially the drumming on this album is monotonous and has pop vibes. The lead vocalist is not used much as most of the singing is done via vocal harmonies which usually tend to go saccharine and lame.

Love Bites but this album does not!

I kid you not , this is the 51st highest selling album of all time !!!!! Sweet mother of god , there's no accounting for peoples taste with lyrics like:

"I don't want to touch you too much, baby
'Cause making love to you might drive me crazy"(Love Bites)

There was a four year break between this album and Pyromania. The fact that they waited for Rick Allen to re-learn his way around a drum kit with only one arm, following his car accident in 1984, is testament to the strength of the band. There is no other band that sounds like Def Leppard. Possibly the sound which they have developed holds its foundation in the use of electric drums rather than a traditional drum kit sound. The guitars and bass are quite heavily processed which I think adds to the very 'electric' sound which they have developed. I have seen these guys live and they sure as hell kick ass!

Usually this genre is too aggressive for me, but this is too sexy to pass up. 100/100

This is not heavy metal. As an example of the hard rock/glam metal genre, this is the pinnacle of pop music. People dismiss this album as a mechanised sell-out, but this is a masterpiece. Mutt Lange's production on this LP is technically flawless. Such outstanding work done by him and the engineers on the production of this album. Soundwise, still sounds fresh and contemporary in 2018.

Def Leppard were never known for their deep and provoking lyrics, so the offerings of good old party-rock are welcome. The album's best track however is the disarmingly powerful song "Gods of War", which is decidely more serious than the other tracks. This is a fantastic pop-metal album. Subjectively however, my favourite is "Armaggedon It".

Your feedback for Hysteria