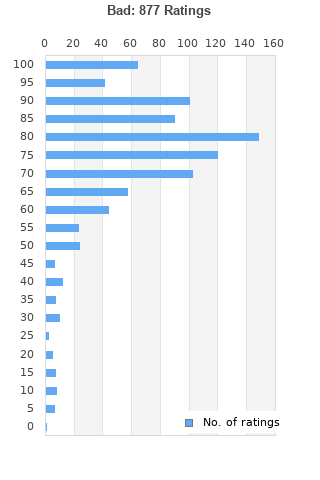 Bad is ranked 3rd best out of 24 albums by Michael Jackson on BestEverAlbums.com.

The best album by Michael Jackson is Thriller which is ranked number 78 in the list of all-time albums with a total rank score of 18,084. 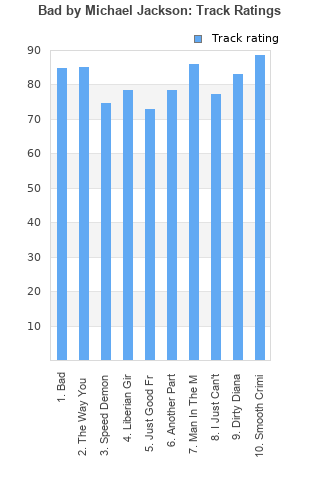 Rating metrics: Outliers can be removed when calculating a mean average to dampen the effects of ratings outside the normal distribution. This figure is provided as the trimmed mean. A high standard deviation can be legitimate, but can sometimes indicate 'gaming' is occurring. Consider a simplified example* of an item receiving ratings of 100, 50, & 0. The mean average rating would be 50. However, ratings of 55, 50 & 45 could also result in the same average. The second average might be more trusted because there is more consensus around a particular rating (a lower deviation).
(*In practice, some albums can have several thousand ratings)
This album is rated in the top 7% of all albums on BestEverAlbums.com. This album has a Bayesian average rating of 76.2/100, a mean average of 74.5/100, and a trimmed mean (excluding outliers) of 76.2/100. The standard deviation for this album is 18.7.

Superb stuff from MJ. Every artist on Earth would take even the "worst" song on this album to his/her own album and would be grateful even TODAY.

Not as good as Thriller, but still contains some iconic tracks. My highlights are Dirty Diana, Smooth Criminal and Man In The Mirror.

for me, the best album ever, the quality, the videos, songs, everything on this album is a true masterpiece, and the tour... oh, really the goat.

Bad is also one of his best albums, at the same time isn’t better than Thriller or close to Thriller. As it doesn’t have an artistic achievement songs like Billie Jean or Beat It a Motown 25 performance or video like Thriller. On the other hand it is still a amazing album, the songs, videos, tour and the era seemed cool. The videos are fire especially Smooth Criminal, songs are amazing, the tour is the best solo tour of MJ. The album for me is a 9/10. It just doesn’t have a performance like Motown 25, video like Thriller or a song artistic like Beat It and Billie Jean. Favourite songs on the album are Bad, The Way You Make Me Feel, Liberian Girl, Another Part Of Me, Man In The Mirror, Dirty Diana, Smooth Criminal and Leave Me Alone.

Bad inevitably failed to match Thriller both in terms of success and artistically.
There’s no artistic achievements like Beat It or Billie Jean and it’s not as consistant as Thriller.
However it still a fascinating record because it was almost impossible to follow an album like Thriller but MJ was still able to create great pop songs like Bad, The Way You Make Me Feel, Smooth Criminal, Dirty Diana, (the bonus Leave Me Alone) and of course Man In The Mirror.
The videos from the album are fantastic too.
Bad produced 5 number 1 singles and sold over 35 million copies, in fact it’s only a disappointment when we think of Thriller who set the bar too high.

But Bad stand the test of time and it’s a classic today, his singles are still played on radio all over the world and some music critics finally recognize it as one of the greatest of the 80s and of all time.
A classic of pop. 9.5/10

This album doesn't even come close to Thriller. There
are no songs as good as Beat It or Billie Jean.
The only songs I liked were Smooth Criminal and
Dirty Diana. The title track was just..........bad!

The most epic "comeback" album ever. Five years is a long time in pop music.

Your feedback for Bad