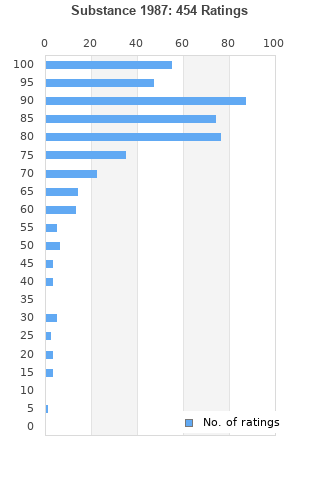 New Order - Substance 1987 - Double Splatter Coloured Vinyl Lp. New.
Condition: New
Time left: 14h 28m 56s
Ships to: Worldwide
£129.00
Go to store
Product prices and availability are accurate as of the date indicated and are subject to change. Any price and availability information displayed on the linked website at the time of purchase will apply to the purchase of this product.  See full search results on eBay

Substance is ranked 3rd best out of 29 albums by New Order on BestEverAlbums.com.

The best album by New Order is Power, Corruption & Lies which is ranked number 262 in the list of all-time albums with a total rank score of 7,602. 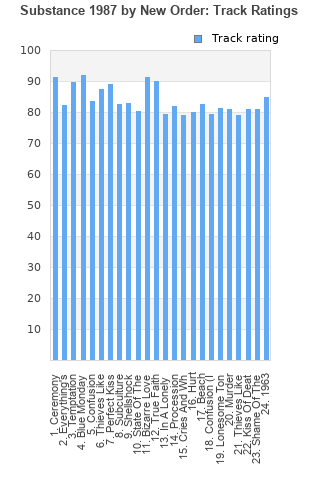 Rating metrics: Outliers can be removed when calculating a mean average to dampen the effects of ratings outside the normal distribution. This figure is provided as the trimmed mean. A high standard deviation can be legitimate, but can sometimes indicate 'gaming' is occurring. Consider a simplified example* of an item receiving ratings of 100, 50, & 0. The mean average rating would be 50. However, ratings of 55, 50 & 45 could also result in the same average. The second average might be more trusted because there is more consensus around a particular rating (a lower deviation).
(*In practice, some albums can have several thousand ratings)
This album is rated in the top 1% of all albums on BestEverAlbums.com. This album has a Bayesian average rating of 83.4/100, a mean average of 81.8/100, and a trimmed mean (excluding outliers) of 83.7/100. The standard deviation for this album is 15.9.

One of only a few 'greatest hits' albums that is really important within the context of an artist's career, since it was released at their peak, collecting all those seminal 12" singles as they evolved their sound and pushed musically boundaries. Disc 2 that other comments refer to is all the B-sides from those singles. These are not on the original vinyl release which just has the A-sides, only on the CD release. For the cassette it was optional - you could either buy it with or without the B-sides!

This was enormous during the 80’s. had on cassette and was overplayed in my Walkman

Great compilation. Like someone below said, this band was well ahead of the curve.

“Blue Monday” was so ahead of its time, it’s not even fair.

One of the best compilation album ever

Disc 1 is fantastic, not a bad song. Disc 2 is a little annoying with all of the instrumentals, which are not all bad, and the remixes, which are also all not bad, but with the actual songs in Disc 2 like Procession and In a Lonely Place, it is annoying to have to listen to the remixes and instrumentals.

just picked this up from a record fair. Been playing this all night. Had forgotten how good it is. A must for fans of post-punk dance music.

Disc 1 is certainly better than disc 2 but wow, overall what a great compilation, one of the GoT for sure.

Your feedback for Substance