You're Living All Over Me (studio album) by Dinosaur Jr. 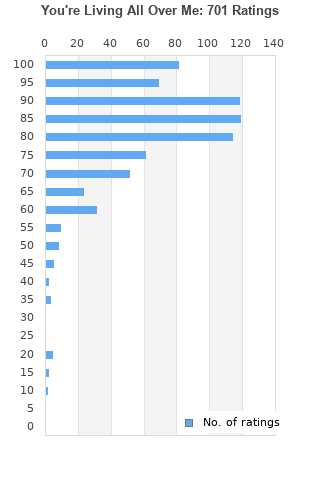 DINOSAUR JR - You're Living All Over Me - CD - Enhanced Original Recording NEW
Condition: Brand New
Time left: 6d 4h 10m 9s
Ships to: Worldwide
$83.75
Go to store
Product prices and availability are accurate as of the date indicated and are subject to change. Any price and availability information displayed on the linked website at the time of purchase will apply to the purchase of this product.  See full search results on eBay

You're Living All Over Me is ranked as the best album by Dinosaur Jr..

Listen to You're Living All Over Me on YouTube 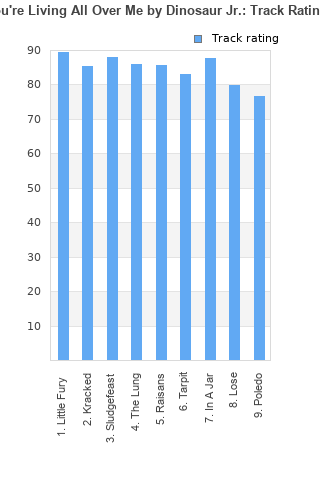 You're Living All Over Me rankings

You're Living All Over Me collection

You're Living All Over Me ratings

Rating metrics: Outliers can be removed when calculating a mean average to dampen the effects of ratings outside the normal distribution. This figure is provided as the trimmed mean. A high standard deviation can be legitimate, but can sometimes indicate 'gaming' is occurring. Consider a simplified example* of an item receiving ratings of 100, 50, & 0. The mean average rating would be 50. However, ratings of 55, 50 & 45 could also result in the same average. The second average might be more trusted because there is more consensus around a particular rating (a lower deviation).
(*In practice, some albums can have several thousand ratings)
This album is rated in the top 1% of all albums on BestEverAlbums.com. This album has a Bayesian average rating of 83.0/100, a mean average of 82.2/100, and a trimmed mean (excluding outliers) of 83.1/100. The standard deviation for this album is 14.2.

You're Living All Over Me favourites

You're Living All Over Me comments

As distorções e a variação do volume são insanos! Excelente!

I hear the influence on some of my favourite bands but I just can't seem to love this. It's good but maybe a little too sloppy for me, I really wanted to love this album. I don't feel the production is great, I am guessing this was the way the album was meant to be but...
Sludgefeast is amazing song!!!

They were definitely ahead of their time with this one. Everything about this album is great.

This was sooo ahead of it's time, I actually thought it came out in the 90s. Almost every track is solid and the overall experience is outstanding.

Very good album and very ahead of it's time, the guitar sounds are amazing and there is a lot of energy on almost every track, I love how catchy some of the songs on here are as well despite being an alternative album. It does feels a bit samey though as the album progresses and due to this it feels like it drags on a bit, despite it only being 35 minutes.

they have a great sound

As someone who tends not to like indie rock bands with weak singers and disturbed lyrics, you might expect me not to like this album. However, I can unreservedly say that the first 7 tracks here are simply incredible.
First: the songwriting is excellent. The poppy moments in 'in a jar' (after 'just can't stop') and 'the lung' are euphoric because they are just parts of a larger song that is decidedly not a 'pop' song. 'In a Jar' especially is beautifully written (great bass too).
Second: lyrics. While I tend not to be a big fan of Cobain-style grotesque lyrical imagery, for some reason it just works on this album. I think this connects with J Mascis' voice, which, while certainly not putting him on any 'best singers' lists, fits perfectly with the lyrics (he sounds exactly like the person who would write the lyrics, giving them authenticity where I often feel lyrics are made weird for the sake of them). Also, the couple snippets of voices from a mental hospital work excellently.
Third (and most important for me): that fucking guitar man. I remember reading something that really summed up what makes this album (and Dino Jr. generally) so unique: they're a lo-fi indie/alternative band with a certified guitar god playing for them. In perfect contrast to his restrained, low-key vocal delivery, Mascis' guitar roars with a fury like few before or since. Not only is his playing aggressive, it is very technically proficient as well. Every single solo on this album is worth hearing, with special kudos to the solo in Raisans, which will never cease to shred my mind with its opening notes.
Final conclusions: 'Lose' and 'Poledo' prevent this album from being a perfect 100, but coming as the last two songs, they don't take anything away from the flow if you end with 'In a Jar' (I also like the 'Show Me the Way' and especially the 'Just Like Heaven' covers on some releases). Everything before that is exquisite; and 'Sludgefeast' will forever be the best Black Sabbath song not by Black Sabbath. I recommend this album wholeheartedly to anyone with an even passing interest in alt/indie rock, as I love this album despite not liking much of the music it spawned.

I just listened to this album for the first time, and I believe I have really been missing out.

Your feedback for You're Living All Over Me