Tango In The Night (studio album) by Fleetwood Mac 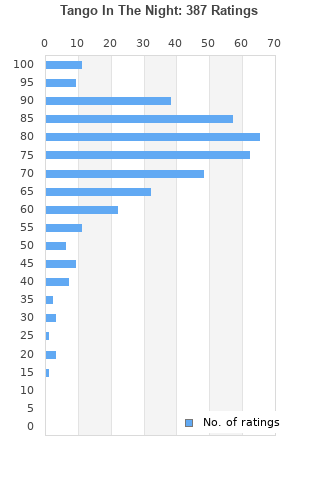 Tango In The Night is ranked 4th best out of 41 albums by Fleetwood Mac on BestEverAlbums.com.

The best album by Fleetwood Mac is Rumours which is ranked number 24 in the list of all-time albums with a total rank score of 36,010. 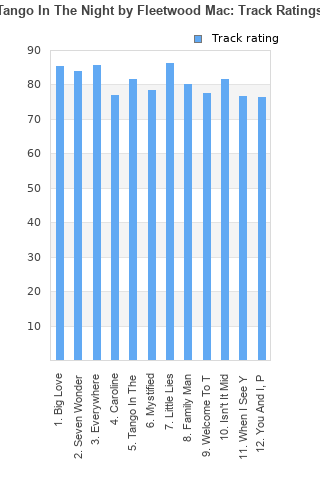 Tango In The Night rankings

Tango In The Night collection

Tango In The Night ratings

Rating metrics: Outliers can be removed when calculating a mean average to dampen the effects of ratings outside the normal distribution. This figure is provided as the trimmed mean. A high standard deviation can be legitimate, but can sometimes indicate 'gaming' is occurring. Consider a simplified example* of an item receiving ratings of 100, 50, & 0. The mean average rating would be 50. However, ratings of 55, 50 & 45 could also result in the same average. The second average might be more trusted because there is more consensus around a particular rating (a lower deviation).
(*In practice, some albums can have several thousand ratings)
This album is rated in the top 16% of all albums on BestEverAlbums.com. This album has a Bayesian average rating of 74.8/100, a mean average of 74.2/100, and a trimmed mean (excluding outliers) of 74.9/100. The standard deviation for this album is 14.8.

Tango In The Night favourites

Tango In The Night comments

Easy to forget how good this album is considering how much attention Rumours, Tusk, and the self-titled album get. But then you listen to tracks like Big Love, Everywhere, and Little Lies and remember how great this collection is. There’s also plenty to love beyond the hits; Isn’t It Midnight, Caroline, and especially the title track, just to name a few, are also excellent. Definitely worth putting the whole thing on once in a while.

An 80's classic album and as good as they've done

The best of the best by Fleetwood Mac! Song music and all in between!

Commercial from the first to the last second, but frankly... i love to listen it.

Another great album. Mirage for me was a decrease in quality after their great run from Fleetwood Mac (75) to Tusk, but this one was a return to form. My favourites are Big Love, Everywhere, Caroline and Family Man.

The large and bombastic production that is typical of 80s music works pretty well for Fleetwood Mac. Little Lies and Everywhere will always be the biggest highlights in my mind, title track is good too.

Nothing can beat Rumours also not this album. Big Love, Seven Wonders, the title track and Isn't It Midnight are great but that about covers it. Not a bad album but not a great one either.

I never thought they could match the brilliance of Rumours.
But they did. Rich melodies and lyrics. They hit the goldmine again.

Really underrated album. Together with Rumours their best work (when you do not include their early blues albums).

Your feedback for Tango In The Night