Louder Than Bombs (compilation album) by The Smiths 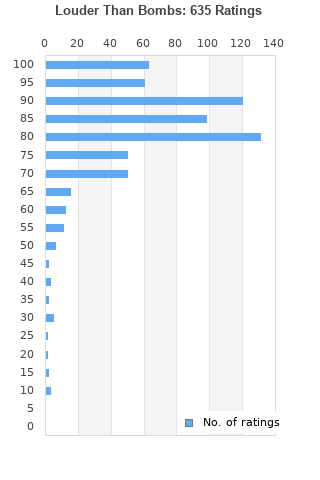 Louder Than Bombs is ranked 6th best out of 15 albums by The Smiths on BestEverAlbums.com.

The best album by The Smiths is The Queen Is Dead which is ranked number 17 in the list of all-time albums with a total rank score of 41,880. 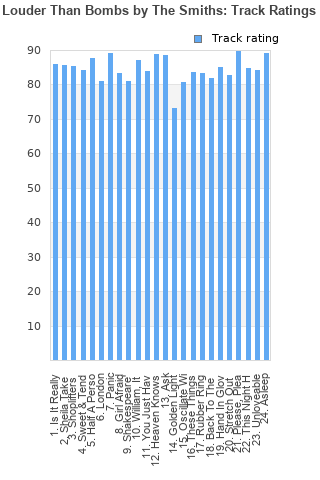 Rating metrics: Outliers can be removed when calculating a mean average to dampen the effects of ratings outside the normal distribution. This figure is provided as the trimmed mean. A high standard deviation can be legitimate, but can sometimes indicate 'gaming' is occurring. Consider a simplified example* of an item receiving ratings of 100, 50, & 0. The mean average rating would be 50. However, ratings of 55, 50 & 45 could also result in the same average. The second average might be more trusted because there is more consensus around a particular rating (a lower deviation).
(*In practice, some albums can have several thousand ratings)
This album is rated in the top 1% of all albums on BestEverAlbums.com. This album has a Bayesian average rating of 83.1/100, a mean average of 81.9/100, and a trimmed mean (excluding outliers) of 83.3/100. The standard deviation for this album is 14.4.

Great compilation, but I prefer Hatful Of Hollow, mostly because of raw, post-punk sound that they had, but it's the matter of personal taste. On this album Sheila Take A Bow, Sweet And Tender Hooligan, Panic and London are probably the biggest bangers, but we have some sad lyrical masterpieces here like Ask, Asleep, Unloveable and Half A Person all of them accompanied with Johnny Marr's excellent guitar work. Of course we have soke great tracks that we had already on on Hatful Of Hollow so I will not write about them here.

What made The Smiths so great was even their B-Sides were good , not all but most . Case in point this compilation and the following killer B-Sides:

-Is It Really So Strange ?
-Sweet and Tender Hooligan
-Half a Person
-London
-Oscillate Wildly
-Rubber Ring
-Please Please Please Let Me Get What I Want
-Unlovable
-Asleep

Think about it ? That bunch of tracks were B-Sides ! . Ridiculous


'Louder Than Bombs' was released in America as a cousin to their British compilation 'The World Won't Listen' and consists of all singles and nearly all B-sides that had not at that point been available in the United States, either on single or album, with a few other tracks added.

Brilliant , minus the simply awful "Golden Lights" which is hands down the worst Smiths track ... period

I don't know, this doesn't feel like an album as much as "The Hatful of Hollow" but oh. my. god, there are so many good songs here.

I typically don't like to consider compilations as proper albums and avoid putting them in my charts, but for this and Hatful of Hollow, I make an exception. Most of these tracks don't show up on any of the Smiths' studio releases, so might as well rate it as any other album.

Yet another Smith's compilation(paint a vulgar picture, anyone?), but you can't argue with the quality of music on offer. Panic, hand in glove, half a person, are off course all great on an album that flows nicely for a comp. Extremely enjoyable.

I agree that a lot of the songs on here flow very well. It's up to opinion what songs people like. The second half isn't as "put together" as the first, but I'm sure some people can find enjoyment in some of the songs there as well. Great for a compilation album.

A collection of killer tracks: These Things Take Time, Panic, Sweet and Tender Hooligan, Back to the Old House are among their finest songs. Great !

Your feedback for Louder Than Bombs