Yo! Bum Rush The Show (studio album) by Public Enemy 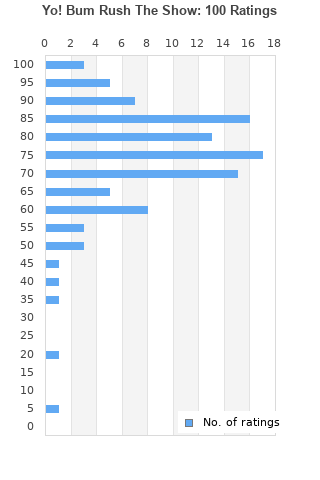 PUBLIC ENEMY - YO! BUM RUSH THE SHOW
Condition: Very Good
Time left: 1d 17h 14m 10s
Ships to: Worldwide
$7.99
Go to store
Product prices and availability are accurate as of the date indicated and are subject to change. Any price and availability information displayed on the linked website at the time of purchase will apply to the purchase of this product.  See full search results on eBay

Yo! Bum Rush The Show is ranked 3rd best out of 14 albums by Public Enemy on BestEverAlbums.com.

The best album by Public Enemy is It Takes A Nation Of Millions To Hold Us Back which is ranked number 244 in the list of all-time albums with a total rank score of 8,194.

Tickets from Ticketmaster Get tickets
May
28
Fri
21:00

Listen to Yo! Bum Rush The Show on YouTube 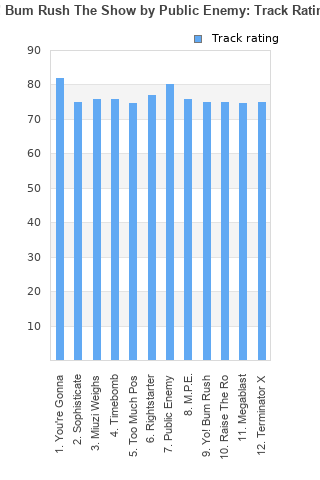 Yo! Bum Rush The Show rankings

Yo! Bum Rush The Show collection

Yo! Bum Rush The Show ratings

Rating metrics: Outliers can be removed when calculating a mean average to dampen the effects of ratings outside the normal distribution. This figure is provided as the trimmed mean. A high standard deviation can be legitimate, but can sometimes indicate 'gaming' is occurring. Consider a simplified example* of an item receiving ratings of 100, 50, & 0. The mean average rating would be 50. However, ratings of 55, 50 & 45 could also result in the same average. The second average might be more trusted because there is more consensus around a particular rating (a lower deviation).
(*In practice, some albums can have several thousand ratings)
This album is rated in the top 12% of all albums on BestEverAlbums.com. This album has a Bayesian average rating of 75.6/100, a mean average of 74.4/100, and a trimmed mean (excluding outliers) of 75.9/100. The standard deviation for this album is 15.6.

Yo! Bum Rush The Show favourites

Yo! Bum Rush The Show comments

Feels less like a debut than the mixtape released before the debut.

I wish I had a quid for every time I've played public enemy #1 and miuzi weighs a ton over the years. They sort of did ok after this album.

Great lyrical content and production value. How can you go wrong with P.E? I am not one of those guys who say that Old School Rap is better than what is out now. But no current rapper can hold a candle to these guys. This album was made in the late 80s and still hold up strongly. I highly recommend this album for just holding up through the test of time!

Somewhat overshadowed by the brilliance of It Takes A Nation, PE's first is still pure dynamite.

Your feedback for Yo! Bum Rush The Show