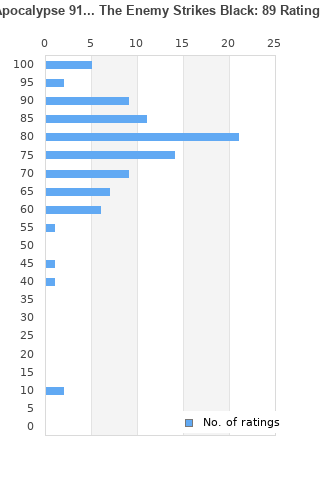 Apocalypse 91... The Enemy Strikes Black is ranked 4th best out of 15 albums by Public Enemy on BestEverAlbums.com.

The best album by Public Enemy is It Takes A Nation Of Millions To Hold Us Back which is ranked number 245 in the list of all-time albums with a total rank score of 7,386.

Listen to Apocalypse 91... The Enemy Strikes Black on YouTube 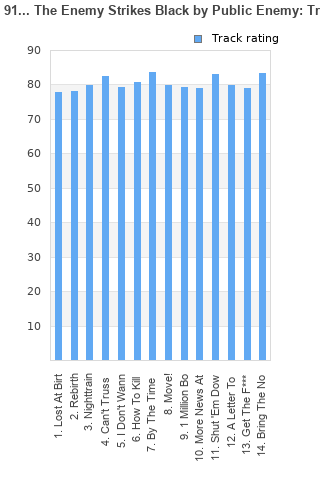 Rating metrics: Outliers can be removed when calculating a mean average to dampen the effects of ratings outside the normal distribution. This figure is provided as the trimmed mean. A high standard deviation can be legitimate, but can sometimes indicate 'gaming' is occurring. Consider a simplified example* of an item receiving ratings of 100, 50, & 0. The mean average rating would be 50. However, ratings of 55, 50 & 45 could also result in the same average. The second average might be more trusted because there is more consensus around a particular rating (a lower deviation).
(*In practice, some albums can have several thousand ratings)
This album is rated in the top 4% of all albums on BestEverAlbums.com. This album has a Bayesian average rating of 77.1/100, a mean average of 76.1/100, and a trimmed mean (excluding outliers) of 77.6/100. The standard deviation for this album is 15.4.

Great album. Terribly underrated. Everybody who listened to the rest of PE discography knows that this is, along with it takes a nation and fear of a black planet, one of their best albums. The sound is even rawer than the previous albums, if you can picture that, with the bomb squad kickin harder than they've done before and chuck d delivering his terribly good conscious flow. If you're a PE fan, this is essential. If you're not, than it is just good music (wich not always is easy to find).
Best tracks: can't truss it; 1 million bottlebags; bring the noise (feat. Anthrax)

Bring the Noise was epic. The rest of this album is a little preachy.

Thanks Naples - your tremendous knowledge of hip-hop enables me to identify the key tracks without having to listen to the rest.

A letdown after Fear Of A Black Planet, and a bit preachy. But these guys were still so much better than most of their contemporaries.

Your feedback for Apocalypse 91... The Enemy Strikes Black