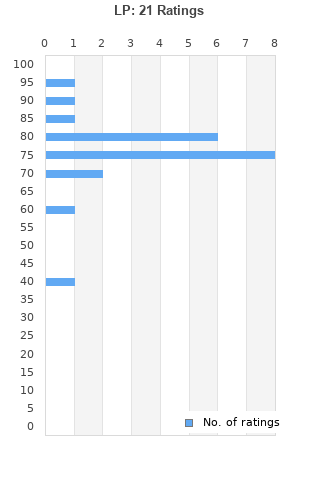 AMBULANCE LTD LP (243) 11 Track CD Album Picture Sleeve TVT RECORDS
Condition: Very Good
Time left: 6d 4h 15m 27s
Ships to: Worldwide
£3.15
Go to store
Product prices and availability are accurate as of the date indicated and are subject to change. Any price and availability information displayed on the linked website at the time of purchase will apply to the purchase of this product.  See full search results on eBay

LP is ranked as the best album by Ambulance Ltd. 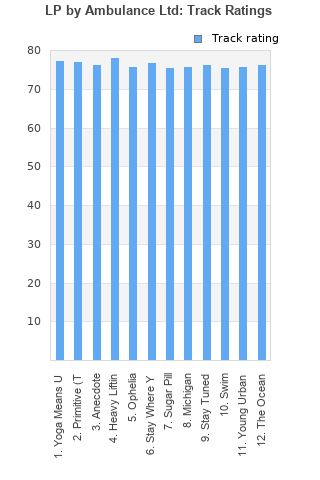 Rating metrics: Outliers can be removed when calculating a mean average to dampen the effects of ratings outside the normal distribution. This figure is provided as the trimmed mean. A high standard deviation can be legitimate, but can sometimes indicate 'gaming' is occurring. Consider a simplified example* of an item receiving ratings of 100, 50, & 0. The mean average rating would be 50. However, ratings of 55, 50 & 45 could also result in the same average. The second average might be more trusted because there is more consensus around a particular rating (a lower deviation).
(*In practice, some albums can have several thousand ratings)
This album is rated in the top 9% of all albums on BestEverAlbums.com. This album has a Bayesian average rating of 76.0/100, a mean average of 77.4/100, and a trimmed mean (excluding outliers) of 77.4/100. The standard deviation for this album is 7.5.

Manages to seamlessly tackle several different styles, keeping you guessing what is coming next. Unfortunately, LP's eclecticism is also it's only major flaw, this is more an emulation of several of their indie rock contemporaries than an attempt to find their own sound.

That aside this is a set of some insanely catchy pop music held up by some steady songwriting. The songs are very immediate and addicting, they all sound like singles, the trouble is they sound like singles released by a dozen different bands.

Ambulance ltd's LP starts off with a sexy, guitar churner "yoga means union" showing enough skill to let you know you should take these guys seriously, before sliding into one of the best tracks "primitive (the way i treat you)" and its snide-yet-caring "relax, don't think about / the way i treat you (believe me)". The best track is "heavy lifting" and its steady, dreamy indie rock stream singing "I'm taking it easy if it comes to fate / But for the time i've gotta wait". The album comes off as unremarkable, but it's pretty good indie pop/rock sometimes reminding me of andrew bird, sometimes BSS, sometimes spoon ("sugar pill") and sometimes the thrills. They carry sage-weighed vocals on the chorus of "stay where you are". "young urban" stretches out well to close with a nice velvet underground cover "the ocean" at the end.

Your feedback for LP