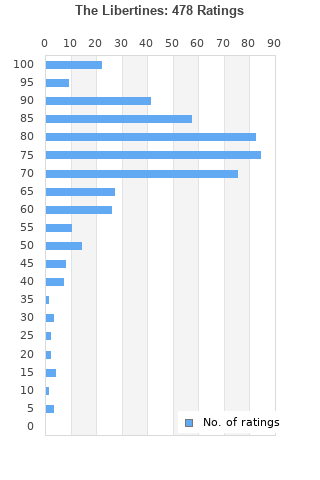 The best album by The Libertines is Up The Bracket which is ranked number 574 in the list of all-time albums with a total rank score of 3,231. 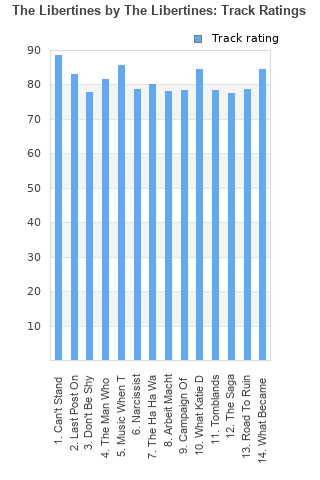 Music When The Lights Go Out
Rating: 86 (79 votes)Comments:

Rating metrics: Outliers can be removed when calculating a mean average to dampen the effects of ratings outside the normal distribution. This figure is provided as the trimmed mean. A high standard deviation can be legitimate, but can sometimes indicate 'gaming' is occurring. Consider a simplified example* of an item receiving ratings of 100, 50, & 0. The mean average rating would be 50. However, ratings of 55, 50 & 45 could also result in the same average. The second average might be more trusted because there is more consensus around a particular rating (a lower deviation).
(*In practice, some albums can have several thousand ratings)
This album is rated in the top 16% of all albums on BestEverAlbums.com. This album has a Bayesian average rating of 75.0/100, a mean average of 73.6/100, and a trimmed mean (excluding outliers) of 75.0/100. The standard deviation for this album is 16.4.

Typical early 2000's garage/indie sound, but it's far from the most entertaining or the most challenging attempts of that era.

This album should be higher on the list. Granted, there are some weaker songs like "Don't Be Shy", "Tomblands", "The Saga" and "Road to Ruin" but the rest of the album hits hard. The album has an incredibly strong opening and a very strong first half. The second half may be weaker, but it's certainly not bad.

There's some great highlights in this record but a lot of the tracks feel inconsistent. It's really clear how bad the relationship between Pete and Carl was at the time. I think it's clear Up the Bracket is a much stronger record than this one but this was a decent album by The Libertines

This sophomore effort shows a mature development, this is brilliant

Good album, but it doesn't have the punch of the first one

Good album. Not better than "Up The bracket" but its very enjoyable. "Can't Stand Me Now", "Last Post On The bugle", "Music When The Lights Go Out" "What became Of The Likely Lads" and "What Katie Did" are incredible songs!!

Would be ranked higher if not for Up The Bracket. It pales in comparison to their debut, and my perception of it suffers as a result.

Not as good as the debut, but still a truly great album. I wish they had made more than the two albums.

Your feedback for The Libertines