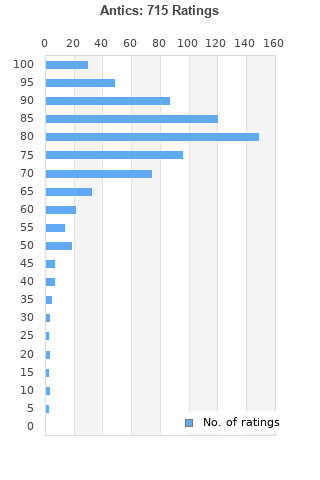 Antics is ranked 2nd best out of 10 albums by Interpol on BestEverAlbums.com.

The best album by Interpol is Turn On The Bright Lights which is ranked number 87 in the list of all-time albums with a total rank score of 17,238. 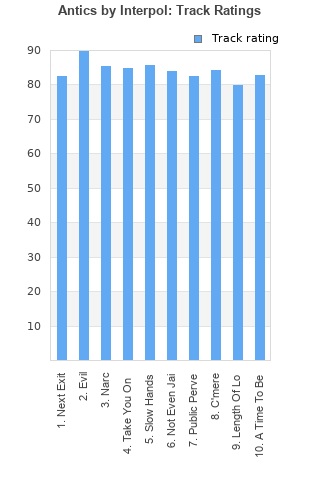 Rating metrics: Outliers can be removed when calculating a mean average to dampen the effects of ratings outside the normal distribution. This figure is provided as the trimmed mean. A high standard deviation can be legitimate, but can sometimes indicate 'gaming' is occurring. Consider a simplified example* of an item receiving ratings of 100, 50, & 0. The mean average rating would be 50. However, ratings of 55, 50 & 45 could also result in the same average. The second average might be more trusted because there is more consensus around a particular rating (a lower deviation).
(*In practice, some albums can have several thousand ratings)
This album is rated in the top 2% of all albums on BestEverAlbums.com. This album has a Bayesian average rating of 78.8/100, a mean average of 77.5/100, and a trimmed mean (excluding outliers) of 78.9/100. The standard deviation for this album is 15.2.

Next Exit is a fantastic opener. Evil, Not Even Jail and Length of Love are also strong tracks. Great follow up and cemented me as a fan - even though I never got to them until 2018!

I don't understand the mixed reception with this album as there is so much to love on this record. Every track is quality and has so much energy that it passes into you as you listen. The guitars are loud and very infectious with the drums providing a fantastic backing and this is consistent for every song. Tracks like Evil, Slow Hands and Next Exit are some of my favourite ever Interpol tracks and I am constantly replaying them every time I revisit this album which is very frequently. The vocal is brilliant and the lyrics are dark and fun to explore and they are delivered with such a punch. However, the quality of the music has slightly dipped from TOTBL but that is not surprising as that is one of the greatest records ever recorded. This release follows closer behind to that record than some people give it credit for and has everything a fan of Interpol should love. Overall, this record has a brilliant track list that leads from one fantastic song into the next right up until the closing seconds.

Disappointed by this after the excellent Turn On The Bright Lights - I just couldn't get in to it. Although I like Evil, and its lyrics, the rest of the album is very forgettable for me.

‘Antics’ was a real slow burn for me taking many many many listens before it finally clicked, but it was well worth the commitment. Yet again the BEA community have got it right

The rhythm section is so hypnotic, just close your eyes and focus on it, it will lure you and you have no choice but to give in (As a band that clearly influenced them would say "This is the way, step inside").

These days, Interpol are a three-piece unit. This is a reality that tends to correlate to their recent dip in critical applause. Their latest two records, El Pintor and Marauder, both feature the absence of longtime bassist Carlos Dengler. Dengler had departed Interpol due to dissension between he and the rest of the band after 2010's self-titled album was released. Despite this change leading to reformed spiritual harmony within the trio, the band lost a sizable fragment of their sonic identity. The ex-bassist's greatest contributions to Interpol come in the form of 2004's sophomore effort, Antics. The record was received favorably by the music press but (ludicrously) didn't obtain the same amount of fanfare as their debut record. Antics is punchier, bleaker and just as addictive as Turn on the Bright Lights. It exhibits an artist unburdened by a gaping hole in their lineup and a quintet feverishly relishing their collective creative prime.

Antics begins by lighting a slow-burning fuse titled Next Exit. A somber, hypnotic opener introducing the listener, reluctantly, to the forthcoming tale of social turbulence. Vocalist Paul Banks remarks, "You've been building up steam, ignited by this fight, so do this thing with me instead of tying on a tight one tonight", calling for bravery in the face of a discouraging, drug-infused descent. The fuse then greets the explosive with second track, Evil. The track is powered by Dengler's intoxicating bassline that cradles the song throughout its duration. The jovial tinge of the track is diversified by Banks' lyrics that conjure the personas of infamous British serial killers Fred and Rosemary West. Spoken from the perspective of the former, Banks chants, "Rosemary, heaven restores you in life, you're coming with me, through the aging, the fearing, the strife." Fourth track, Take You on a Cruise, serves as the centerpiece, fading in slowly like a ship through a dense fog bank. Banks himself has described this as a slight departure from the pathos of the album. He claims, "It has a different tone to the rest of the record for that reason. It’s a tacky seduction story: this guy who may be worldly and well-educated but he’s trying to get laid with a cocktail waitress." The coalescence of the rhythm section in the second half of the track is as majestic as the maritime imagery Banks' poetry frames. This conglomerate plays wonderfully aside Banks chanting, "White Goddess, red Goddess, black Temptress of the sea, you treat me right," calling upon Greek mythology. The finale serves as one of the band's most overlooked cuts. A Time to Be So Small has sonic textures that fashion an appropriate ending for the album with Banks' baritone bathed in reverb as the track floats away. Fogarino's drum hits here have such a fascinating sense of weight that they can be felt within your chest cavity. The song itself is said to be written from the point of view of a crustacean watching a family squabble between a father and son. Go figure. However, aquatic anomaly aside, the lyrics convey a more sinister coloring. The LP ends with Banks proclaiming, "When the cadaverous mob saves its doors for the dead men, you cannot leave," sharpening the threat of death at sea.

Unfortunately for the immensely gifted ensemble, Antics would serve as the band's final full-length classic. Here, the synthesis of emotional tonnage into harmonious elixir is strikingly effortless. Interpol would go on to produce four more above-average, but never legendary albums. As conversed earlier, a portion of it spawned from the crater left by their skillful bass player, but this came long after they'd pumped out their fourth outing. Others would potentially point out that the fracture left behind from the infighting did more damage to the psyche of the band rather than the group's sonic capabilities. Whatever it was, Interpol would never reach these heights again but with that said, not many artists have. A very small sector of the music-making landscape could brandish not one, but two classics to start a recording career. Interpol swam in the deepest of waters with the most fearsome of fauna and emerged remarkably relevant and intact. They've climbed back into their luxury liner with two first-class albums shoveling coal into their furnaces. Interpol has earned the right to go at their own pace now and anything they serve us in the future is a much obliged bonus. The timid, sharply dressed boys from the big city have nothing more to prove.

"If time is my vessel, then learning to love
Might be my way back to sea
The flying, the metal, the turning above
These are just ways to be seen"

Heard this album before TotBL. Got drawn in by Evil (as has happened to me in numerous aspects of my life). As such this album sits slightly above its predecessor for me. I like the distinctive Interpolistic guitars and vocals but have yet to be impressed by the follow-up albums to this one.


Top Tracks: Evil, Not Even Jail.

Borrowing from the likes of Joy Division and Bauhaus this is a near perfect album. A departure from Turn on the Bright Lights but a much more even album. You need a sturdy mental disposition to have this album on repeat but it's difficult to listen to anything else once you start.

Your feedback for Antics